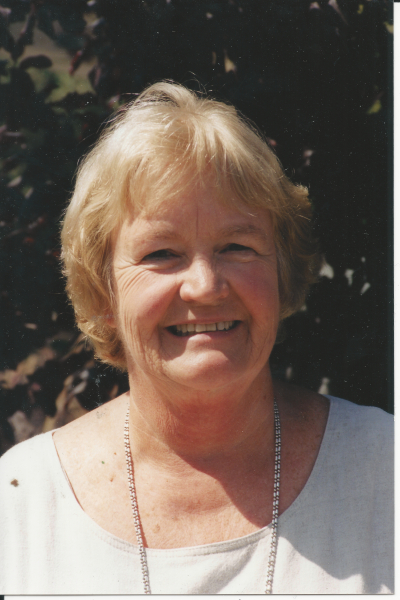 In loving memory of Mary, born in Robinsonville, Wisconsin to James and Florence (Conboy) Brinks.

Mary died of natural causes at age 87, in Redwood City. Mary’s faith in God was a principal guiding force throughout her life. She was devoted to family and friends, and frequently walked/hiked with both.

Mary began her career with the Sequoia Union High School District as a Home Economics teacher at Ravenswood High School. She later became a guidance advisor, working at San Carlos, Carlmont, Sequoia, and ending her career as the head of the Guidance Department at Menlo-Atherton, from which she retired in 2002. While at M-A, Mary earned the school’s Sisyphus award twice.

Mary was a successful real estate investor and landlord. Along with her husband Barry, she owned and managed Pear Williams Restaurant in Menlo Park from 1976 - 1982. She was a volunteer docent at Filoli, working as a House and Garden docent and also dispatching nature hikes for school children. Mary was a volunteer usher with Stanford Live, San Jose Rep, and Palo Alto Players.

Mary loved working in her garden. She was known to some as “the rose queen”. She loved playing bridge with her “Ladies of the Club”. She was active in her church and had a very strong connection to her “Best Home Group”. Mary also participated for years in a book club, dubbed “Fallen Women”. Mary loved to travel and made one or two trips each year. Her travel was frequently service based.

Photo Gallery
0 photos Upload a photo
Remembrances
1 entry Submit a remembrance
From Shannon Griscom
Sept. 27, 2021
I first met Mary at Ravenswood High School in 1971 when we desegregated the school and made it a magnet, volunteer school. It last 5 years. Mary and I remained friends and she was a great source of wisdom and comfort, especially after I was widowed. ...
Read more
Memorial service
Service: Saturday October 16, 2021 11:00 AM Peninsula Covenant Church 3560 Farm Hill Blvd. Redwood City, CA 94061
Make a donation
In lieu of flowers, please send donations, in honor of Mary, to Kenya Help: https://kenyahelp.us/
About this site     Contact us