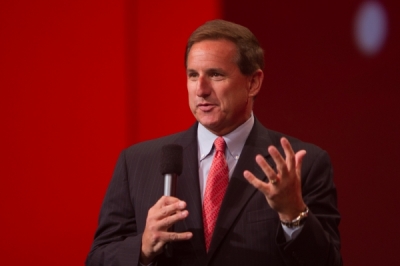 Silicon Valley tech executive Mark Hurd, who served as CEO for Redwood City-based Oracle and Palo Alto-based Hewlett-Packard, has died at the age of 62, according to a statement from co-founder Larry Ellison posted on Hurd's website.

A business visionary who turned around the fortunes of the corporations he helmed, Hurd, an Atherton resident, died of an unspecified illness on Oct. 18, Ellison said.

"Mark was my close and irreplaceable friend, and trusted colleague. Oracle has lost a brilliant and beloved leader who personally touched the lives of so many of us during his decade at Oracle," Ellison said.

Hurd was born on Jan. 1, 1957, in New York City. He grew up on Manhattan's Upper East Side and attended The Browning School, an all-boys college preparatory school. The family moved to Miami, Florida, where he attended Archbishop Curley-Notre Dame High School, according to his company biography.

In high school, he was a top-10 ranked tennis player in Florida. His athleticism earned him a tennis scholarship to Baylor University in Waco, Texas, where he studied business and marketing. Already showing leadership skills, he was also fraternity president of Phi Delta Theta. He graduated with a Bachelor of Business Administration in marketing management in 1979.

Hurd began his business career in 1980 as a junior salesman at the National Cash Register Corporation in San Antonio, Texas, which made ATMs and cash registers. In 1988, he moved to Dayton, Ohio on a temporary assignment and quickly rose through the ranks. He became the company president in 2001 and was promoted to CEO in 2003, according to his biography.

Hewlett-Packard took notice of his leadership skills and recruited him in 2005 as its CEO. At HP, Hurd saw the company's revenue rose 63% and its stock price doubled. HP became the top desktop- and laptop-computer seller under his tenure and increased its market share in 2008 in inkjet and laser printers to 46% and 50.5%, respectively, according to Fortune Magazine. He was also known for aggressive cost-cutting, laying off 15,200 workers, or 10%, shortly after his arrival. Hurd slashed other areas of the workforce and reduced the company's number of software applications, according to Fortune.

Fortune named him one of its "Most Powerful People in Business" in 2007 and the San Francisco Chronicle recognized Hurd as "CEO of the Year" in 2008. In addition, Hurd was listed as one of Forbes' "Top Gun CEOs" in 2009.

But Hurd's tenure at HP was also marred by scandal after claims of sexual harassment by a female contractor. An internal investigation concluded that Hurd didn't violate HP's sexual harassment policy, but the company found that he submitted inaccurate expense reports, according to news reports, including from Reuters and the Wall Street Journal. He resigned from HP on Aug. 6, 2010.

Hurd was not unemployed for long, however. Oracle Corporation's then-CEO Larry Ellison tapped him one month later as co-president, sharing the position with Safra Catz. Ellison also appointed him to the board of directors, according to Hurd's biography. As president, Hurd reshaped the company's sales force to create more than 4,000 salesperson-specialists, who focused on a single product, according to his company biography.

After a dinner with his daughter and her friends, who had recently graduated from college, he tapped youth enthusiasm by implementing a new program for recent graduates to create a startup feel at Oracle. The "Class Of" program hired college graduates into a dedicated sales program.

In 2014, Hurd and Catz shared the role of CEO after Ellison became chief technology officer. Hurd headed sales, marketing and services; Catz ran finance, operations and legal. The arrangement proved successful for the corporation: Oracle's stock rose to a high of $51 in 2017, according to his biography.

Hurd was visionary on cloud computing, which he predicted would be the future of data storage. Under his leadership, Oracle's cloud-storage products became a dominant force in the industry, competing against industry giants such as Amazon and Microsoft and attracting clients such as AT&T, Bank of America, and Australian airline Qantas. He also engaged in acquisitions, purchasing NetSuite, the "very first cloud company," for approximately $9.3 billion. He oversaw other purchases that strengthened the company's position in providing cloud computing, according to his biography.

He also co-authored a book in 2004, "The Value Factor: How Global Leaders Use Information for Growth and Competitive Advantage," with former National Cash Register Corporation CEO Lars Nyberg to share their views on the impact of information access for businesses.

Last month, Hurd announced he would go on leave for unspecified health reasons. He is survived by his wife of 29 years, Paula, and two daughters, Kathryn and Kelly, according to his online biography.

He remained a lifelong donor to his alma mater, Baylor University, including becoming vice chairman of its Board of Regents. He and his wife supported the national championship tennis program at Baylor, and they gave a financial gift to launch the public phase of a $1.1 billion philanthropic campaign for the university's future growth.

University leaders have mourned him.

"On behalf of the Baylor Board of Regents, we are deeply saddened by the passing of Oracle CEO and our Board's Vice Chair Mark Hurd," board chairman Jerry K. Clements said in a statement posted on the university's website.

"For the past five years Mark Hurd served tirelessly and selflessly on his alma mater's board. He genuinely loved and cared for Baylor and contributed his time, strategic leadership and treasure to help achieve Baylor's vision for the future as the preeminent Christian research university. Our board will miss greatly his presence, wisdom and leadership. To the Hurd family, our thoughts, prayers and support are with you at this difficult time."