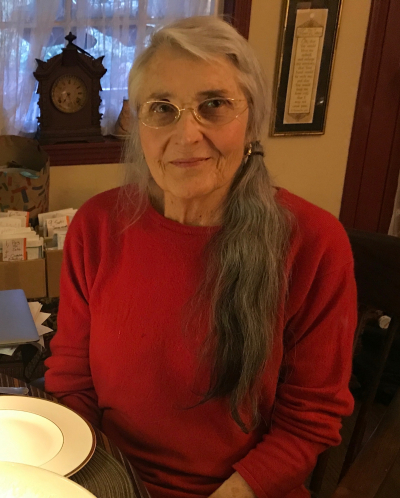 Marianne Tucker Ault-Riche died peacefully in her sleep on Monday, January 10, 2022 at the age of 74 after a long battle with Q Fever and a life-long heart condition. She is survived by her daughter Gabrielle Ault-Riche and son-in-law Joe Gruber Jr. of Pacifica, CA; her son JeanMarc Ault-Riche, daughter-in-law Alice Ault-Riche, and granddaughter Scarlett Ryder of Palm Springs, CA; and her sister, Nicole Riche of Ossining, NY.

Marianne was born in New York City 07/09/1947 and raised in a bilingual French and English home in Ossining, NY. She attended school for 12 years at Scarborough Country Day School, followed by NYU, the Sorbonne, Howard University and the University of Maryland where she received an MSW. Following a post-masters year in Psychiatric Social Work at the Menninger Clinic (then in Topeka, KS), she worked at the Clinic for 20 years as a social worker and family therapist.

Early in her career she was sent by Menninger to study Family Therapy from the major pioneers in the field and developed an Integrated Model of Family Therapy with David Rosenthal, PhD, which was taught in Menninger’s School of Psychiatry. In the late 1970’s Marianne developed a course for Washburn University called “Talking Straight and Fighting Fair with those you Love.” Subsequently she developed with Harriet Lerner, PhD, a workshop of the same name, which contributed to Lerner’s best selling book The Dance of Anger. In 1985, Marianne edited the first book on the subject of Women and Family Therapy, which offered a feminist critique of the field. Also during this time she co-produced with Steve Lerner, PhD an educational videotape, “Love and Work: One Woman’s Study of Her Family of Origin.” During her last years in Topeka, Marianne was the consultant to the Family Preservation Program of the Department of Social Services, an effort to provide intensive in-home services to keep children at imminent risk of removal, safely with their families. She also volunteered at the Carriage House project and provided pro bono consultation to the Battered Women’s Program of the YWCA, where she also moonlighted as an exercise instructor.

Marianne’s passion was teaching Family Therapy, and she taught regularly throughout the Midwest in the 1980’s. Marianne moved to Palo Alto, California in 1994 so that her then husband, Dana Ault-Riche (son of Bob & Marilynn Ault), could pursue a post doctorate degree with Arthur Kornberg, MD at Stanford. Their children attended the French-American School in Palo Alto (later called ISTP - International School of the Peninsula), where Marianne subsequently provided consultation. In the late 1990’s she taught Family Therapy at the University of California School of Social Work in Berkeley and supervised interns at MRI in Palo Alto.

During her 28 years in California, Marianne had a private practice of Family and Couple Therapy. She developed a reputation for her very direct style and her willingness to work with the most challenging of families. In 2012, she became certified in EMDR (Eye Movement Desensitization and Reprocessing) Therapy and was starting to give presentations on how to introduce EMDR into a Family and Couple Therapy practice.

Marianne is remembered as a strong spirit unencumbered by convention, a fierce advocate for social justice and women’s rights, and an incredibly devoted and loving mother and friend.

Photo Gallery
0 photos Upload a photo
Remembrances
0 entries Submit a remembrance
Memorial service
A celebration of life will be organized later this year. If interested, please contact her family at [email protected]
Make a donation
Marianne donated her body to Stanford University Medical School. Contributions in her honor may be made to the Southern Poverty Law Center. https://support.splcenter.org/site/Donation2?2022.donation=form1&df_id=2022&mfc_pref=T
About this site     Contact us