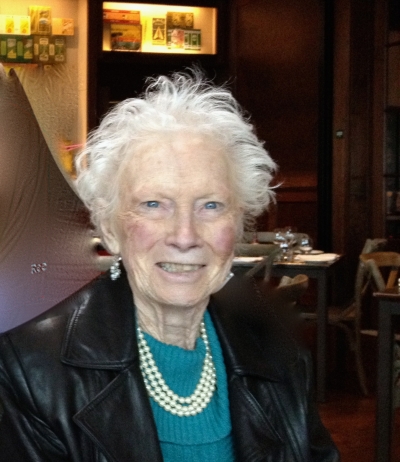 Margaret Boutin, 92, died peacefully Aug. 6 in Windsor, California. She was born Jan. 13, 1922, in Trenton, New Jersey. Margaret was the third of six children; she is survived by her oldest and youngest sisters, Jean and Maureen. She was the mother of three children: Bill, Bob and Patti. She lived in Palo Alto for over 40 years from 1960 to 2002. Margaret worked for Santa Clara County for 20 years. She was an active member of St. Albert the Great Catholic Church. Margaret was a caring loving person and will be missed by all who had the privilege of knowing her. Her six grandchildren -- Bill, Margo, Kevin, Naomi, Michael and John -- loved her dearly and she them, not to mention her seven great-grandchildren, Renée, Julia, Luke, Noah, Cole, Lewis and Caleb. She loved entertaining and singing Irish songs and drinking Irish Coffees. She had many friends in the Bay Area over the years. Her love over flowed to a few dear ones who thought of her as a second mom. She suffered from Alzheimer's disease for 15 years. She was well loved and will be greatly missed.

Photo Gallery
0 photos Upload a photo
Remembrances
2 entries Submit a remembrance
From Michael & Sheila
Sept. 3, 2014
We also called Margaret Mom Boutin as she always treated us like Family. She was one of those extra special people that we were lucky enough to know, and love. We will always remember Mom Boutin with love, and kindness.
Memorial service
A gathering for friends and family will be held at the duck pond in Palo Alto at the yacht harbor on Saturday, Sept. 20, at 11 a.m. Please come and share your memories.
About this site     Contact us