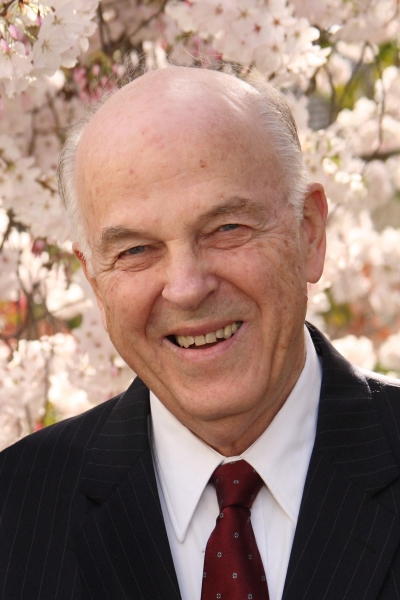 Malcolm Hardy Dudley, former Mayor of Atherton, businessman, naval captain and musician, died peacefully on February 10, at home in Atherton with Cosette Dudley, his wife of 67 years, and his two daughters, Lynette Stebing and Virginia Rock. He will be remembered for his love of family and extended circle of friends, his generosity, kindness, and engaging character. Malcolm greeted people with a warm smile, friendly handshake and an enthusiastic story. He always took great interest in helping people, and believed in fairness and opportunity for all. Malcolm’s charismatic, thoughtful, trustworthy and caring personality drew people to him.

Malcolm was born in Santa Cruz, California in 1932, the son of Allen Mason Dudley and Gladys Alda (Hardy) Dudley, where he lived with his sister Carol until the family moved to Sacramento in 1942, after the start of WWII. His father, Allen, worked at McClellan Field painting images, as requested by the pilot of each combat plane.

Malcolm attended Sacramento City College from 1950 - 1952 and University of California, Davis from 1952 – 1954. As two young college students, Cosette and Malcolm married in 1954. They initially earned a living from Malcolm’s popular dance band, which played frequently in the Sacramento area. After his graduation from UC Davis, he was commissioned an Ensign in the U.S Navy and was assigned to the USS Florikan (ASR-9), a submarine rescue vessel, where he served from 1954 - 1956 as navigator, operations officer and communications officer. Upon completion of his duty aboard the Florikan, the end of his two-year active-duty naval commitment, he was offered the opportunity to serve in the U. S. Naval Command Staff in London, England, if he would extend his active duty service for three years. He and Cosette both agreed that would be a wonderful opportunity at that stage of their lives. Malcolm, Cosette and daughter, Lynette, were sent to England, first class, aboard the SS United States. Malcolm served as a communications officer for the US Naval Command Europe from 1958 to 1961. During that time Malcolm also did graduate study evenings in international monetary economics at the London School of Economics. After completing five years of active-duty naval service, Malcolm continued as a member of the naval reserve, for a combined total of 32 years. He held several commanding officer positions, retiring as a naval captain in 1982.

While in London, Malcolm purchased his elegant Jaguar Mark IX, which they shipped to the U.S. and drove across the country back to California, a car Malcolm continued to drive the rest of his life. On returning to the U.S. in 1961, the family moved to Atherton, where Cosette and Malcolm have remained since. Malcolm entered the investment business with Dean Witter & Co. in 1962, and continued to work as a financial advisor until his retirement in 2017.

In addition to his career in the investment business, Malcom was concerned about environmental and traffic congestion issues. This led to his interest in local politics and to become a champion of efficient, affordable and equitable local transportation options. In 1976 he ran for the Atherton City Council, on which he served 24 years, six as the mayor. He was elected to several regional bodies during that time, including LAFCo, Regional Planning and San Mateo County Transportation Authority. He is credited for numerous transportation projects, and helped lead the town in areas of finance, environment and culture.

He had a love for boating which developed during his years in the U.S. Navy. He relished being out on Lake Tahoe in his ski boat during the annual summer family vacation at Camp Richardson, as well as taking many voyages in their 70-foot motor vessel, MV Lisa Marie, which berthed at the San Francisco Marina Yacht Harbor. During summers he regularly took the Lisa Marie up the coast, inviting family and friends to cruise the San Juan and Canadian Gulf Islands and Desolation Sound. He spent several weeks per year at their family property on the Strait of Juan de Fuca, and the Elwha River, reveling in nature and working on environmental issues in the area to ensure the legacy of pristine lands.

Duke Ellington, Count Basie and Glenn Miller are just a few of Malcolm’s favorite musical artists. His parents were musicians and Malcolm was inspired to play jazz saxophone in his teen years, an enjoyment which lasted his lifetime. He led “The Malgers,” his jazz band, with some wonderful guest musicians in the 50’s. He played in the Navy's Officer Candidate School (OCS) marching band. He loved 17 piece big bands and big swing orchestras, so soon after moving to Atherton, Malcolm joined the Unicorns swing band and continued to play with them until this year. He was a lover of music, encouraging and supporting the musical efforts of those around him.

Photo Gallery
0 photos Upload a photo
Remembrances
2 entries Submit a remembrance
From Jesse Ortiz Mares
March 9, 2021
I’m grateful to have met such a wonderful person. The kind of man that inspires others, that enlightens a room with a smile and natural warmth. Until we meet again, farewell amigo.
Memorial service
A family celebration of his life will take place at East Lawn Memorial Park, Sacramento, where his ashes will be interred. A memorial will be arranged at a later date to honor a life well lived, at Saint Mark’s Episcopal Church, Palo Alto.
Make a donation
If you would like to make a donation in his name please consider one of the following: Saint Mark’s Episcopal Church https://saint-marks.com/give/ Bach Dancing & Dynamite Society https://bachddsoc.org/support/donate/ Sierra Club, Loma Prieta Chapter https://www.sierraclub.org/loma-prieta/donate-options
About this site     Contact us