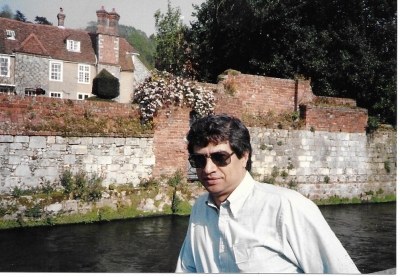 Dr. Luis Canales (age 78) passed away due to natural causes this past March 16 at his home in Menlo Park, California. Luis was born in San Luis Potosi, Mexico, October 25, 1941. He graduated with a BS in Civil Engineering from the National Autonomous University of Mexico in 1970 and obtained both his MS (1971) and PhD in Geophysics (1975) from Stanford University, where he formed part of the Stanford Exploration Project. He was a cofounder of the Center for Scientific Research and Graduate Studies in Ensenada, Baja California, Mexico, where he headed the Computer Center and the Master’s program in Geophysics. He held development and research positions in several oil companies including Schulmberger (WesternGeco), Arabian American Company, Mobil Oil and Digicon. He also invented the LUNA technique, which is now recognized as a significant contribution to the analysis of seismic data and has proven highly useful in different areas of scientific research (oil companies and others) in such diverse applications as multiple attenuation, trace interpolation and restoration of missing data. His final contributions to science and technology were as an Associate Researcher at Stanford University. Luis had both a vast and deep understanding of theory and the ability to synthesize his knowledge to solve practical problems, for which he received various awards and prizes including the worldwide Geophysics Reginald Fessenden Award on 1996—the first Mexican geophysicist to receive this award, the 2012–2013 International Excelsis Award presented to opinion leaders, and the 2018 Antonio García Rojas Prize of the Mexican Geophysical Exploration Association. Luis also had a deep love for his lovely wife Judith with whom he shared overseas travels, a huge admiration for his parents to whom he was always grateful and a deep love for his siblings. Those who knew Luis will remember him for his passion for singing and playing the harmonica, for his knowledge of fine wines and for his friendships with the employees at his favorite local restaurants with whom he never hesitated to share a glass of wine. He attended St. Thomas Aquinas Church in Palo Alto every Sunday and will always be remembered as a consistent, supportive, loving, and joyful friend. He was preceded in death by both his parents, Coronel Espiridion and Maria Luisa Canales, by his wife Judith Canales, and by his brothers Espiridion and Juan Canales. He is survived by his brother Enrique Canales, and his sisters Evelia Canales and Maria Luisa Canales, and Maria’s husband Jose J. Nakakawa, as well as numerous nieces, nephews, and friends. Funeral services were held from 2:00 to 3:00 p.m. Monday, March 23, 2020 at the Alta Mesa Funeral Home, 695 Arastradero Road, Palo Alto, California. Although a religious ceremony was not possible because of ongoing health concerns, rosary prayers were recited, and words of eulogy were spoken. Attendance was limited to a maximum of 10 people as advised by the authorities. Cremation was performed at the funeral home at 4:00 p.m. We appreciate all attention received on the occasion of his death.

With all our love, Canales Family.