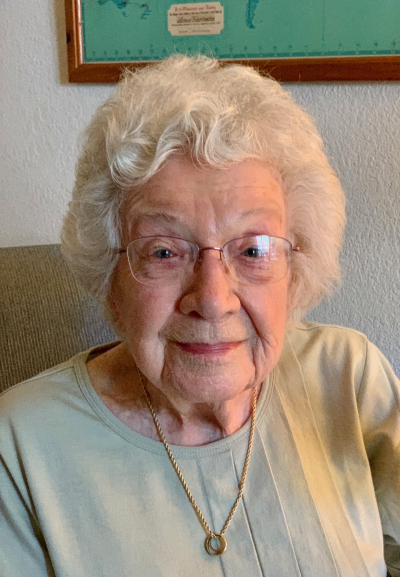 Lou Harrington, long time resident of Menlo Park, passed away peacefully on September 28, 2021 at the age of 98. She was born in Butte, Montana to William and Helen LaVelle. William, “Billy” LaVelle was a self-made entrepreneur who ran a fleet of trucks that supplied dynamite to the dozens of copper mines in Butte. Helen was a piano teacher and President of the Montana State Music Association. From her mother Lou received a life long love of music. It was a quiet, but solid family upbringing with siblings Willa Marie, Helen Claire, Bill, and Tom. Her Butte horizons expanded when she enrolled at Montana State University in Bozeman, Montana, where she graduated with a degree in Home Economics. In the early 40s the world as consumed by World War II. Although clearly aware of the momentous challenges the world faced, news of the war was not in the forefront of the students at Montana State. What changed Mom’s life forever, though, was her meeting James Harrington. He turned out to be the love of her life and they were married in 1945, before Jim shipped off to South Korea as part of the U.S. occupation force just after the war ended. Lou returned to Butte to await Jim’s return.

Upon his return to the U.S. Jim was fortunate to land a job with Pan American World Airways and the couple moved to the San Francisco Bay Area. From there they traveled the world, visiting Europe, Asia, Africa, South America and the Middle East.

In Menlo Park, CA, their family grew to include their children William, Joanne, Daniel, Beth, and Claire. Besides Jim they were the true love of her life. The most giving, generous and loving devotion to her kids was her ultimate joy and accomplishment.

While raising a family she also joined the work force as secretary for the Escondido Elementary School on the Stanford campus. She retired after 20 years of devoted service to the school and the children. Lou and Jim were very devout Catholics. They attended daily Mass at the Church of the Nativity in Menlo Park. They put their faith to practical use with long service feeding those in need at Padua Dining Room in Redwood City and with the St. Vincent de Paul Society. Of course, there was some vacation time, too. Lou and Jim loved Hawaii and practically made Kailua-Kona on the Big Island a second home, returning there year after year.

A Celebration of Life will be held at The Church of the Nativity, 210 Oak Grove Ave., Menlo Park CA 94025. Time and date are pending.