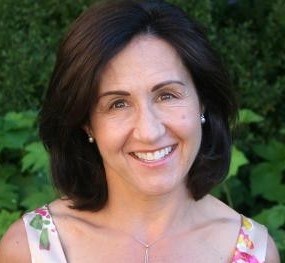 Kathleen Marshall Diekroeger (59), of Woodside, CA died peacefully at home of pancreatic cancer on March 19, 2021 surrounded by her family. Kathy, the daughter of Michael and Janet Marshall, was born in Norristown, PA in 1962. She grew up in Bensalem, PA and then Stow, MA. She attended Nashoba Regional High School and graduated from Dartmouth College in 1984 with a degree in Economics. At Dartmouth, Kathy was a member of the Cross Country and Track teams, honing her leadership skills as Captain of the Cross Country team her Junior and Senior years. She was also a member of Kappa Kappa Gamma sorority, serving as Secretary her junior year and President her senior year. After graduating from Dartmouth, Kathy worked for Bain & Company in Boston. She then headed west to attend the Stanford Graduate School of Business, where she fell in love with her husband Ken. They graduated in 1988 and were married in the Bay Area in 1989.

Their marriage was soon followed by the birth of Kenny Jr. in 1990, Danny in 1992 and Mikey in 1995. During this time, Kathy worked in business development for healthcare firms Vivra, Inc. and Vivra Specialty Partners. Life soon became too hectic raising the boys, managing the household, and working outside the home, so Kathy retired and turned her attention to school volunteering. She served as President of the Parents’ Association and later joined the Board of Trustees at the Carey School in San Mateo, where she served as President for two years. She also co-chaired the Auction at Sacred Heart School in Atherton. During the 12 years that her boys attended Menlo School she became known as a reliable and organized “go to” person, taking on jobs big and small. Some of her larger roles were serving as Vice President and President of the Middle School Parents’ Association, serving as class captain and chairing the Annual Fund, co-chairing the Menlo School Benefit, and serving as President of the Upper School Parents’ Association. When the boys moved on to attend Stanford, Kathy practically became a full-time baseball fan for eight years, attending Stanford baseball games at Sunken Diamond and traveling around the country to watch them play. Those were particularly happy years, as Kathy and Ken welcomed players, parents and coaches into their home and became integral members of the Stanford baseball family.

When her boys moved on to professional baseball, Kathy got an inside look at the crazy life in the minor leagues. She felt compelled to document and share those experiences and completed what she calls her favorite project of all time: writing a book entitled “I Should Have Quit This Morning, Adventures in Minor League Baseball.”

Kathy was happiest when she was spending time with family and friends hiking, biking, playing golf and traveling throughout the US and abroad. Unfortunately her life was interrupted when she was diagnosed with Stage IV pancreatic cancer in January of 2020. Her diagnosis was closely followed by the onset of COVID restrictions, and she considers herself fortunate to have been able to spend most of 2020 with her family in their “bubble.” Kathy will be remembered as kind and generous to all who knew her. She wishes her family and friends to know that she loves them and is grateful for their friendship and for the many happy years of her life.

Photo Gallery
0 photos Upload a photo
Remembrances
0 entries Submit a remembrance
Memorial service
For more information about a memorial service, visit: https://www.caringbridge.org/visit/kathydiekroeger
Make a donation
In lieu of flowers, please consider gifts in her honor to: Part The Cloud/Alzheimer’s Association Stanford Athletics Or the charity of your choice
About this site     Contact us