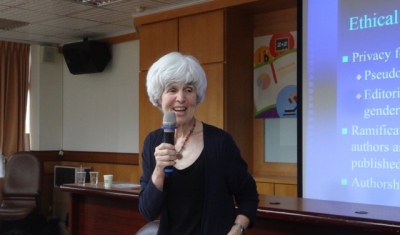 Judy was born in Chicago on January 8, 1941 to Joe and Ethel (Levy) Horwitz. She was the middle child between older brother David and younger sister Barbara. The family soon moved to Highland Park, IL where she graduated from Highland Park High School in 1959. She spent her freshman year at the University of Wisconsin immersed in the Integrated Liberal Studies (ILS) program, which she loved. She sacrificed completion of that program and transferred to Northwestern, when she became engaged to Lee Shulman, a graduate student at the University of Chicago. They had met at Camp Ramah in Wisconsin and he subsequently taught her Hebrew at North Suburban Synagogue Beth El, a conservative congregation that her father and mother helped to found. The 18 year old teacher and his 16 year old student fell in love, breaking all the rules. When they married during winter break late in 1960, she was a 19 year old sophomore at Northwestern and he was a 22 year old doctoral student at Chicago.

Judy completed her preparation as an elementary school teacher in 1963, when the couple moved to East Lansing, Michigan where Lee would teach introductory educational psychology for future teachers at Michigan State University and she would teach 4th grade at Wardcliffe Elementary School in Okemos. Her first few months of teaching were exciting, punctuated by the excitement of “the new math” and shocked by living through the Kennedy assassination with her ten-year-old pupils. Babies followed. Allen was born in 1964, and Adina 23 months later. In 1969-70, Judy and Lee spent a sabbatical year in Jerusalem. There she grew closer to Lee’s grandfather, Rabbi Jacob Shulman, who died while they were in Israel. In December of that year, she gave birth to Daniel Jacob, who would carry his grandfather’s name. Judy never tired of community engagement. In East Lansing, she shared in the creation of a new synagogue, Kehillat Israel, completely lay-led, and served many terms as chair of the synagogue school board.

As the three kids were growing up in the comfortable village of Okemos, Judy was inspired to pursue a calling that would become the driving force of her professional life—addressing the challenges of educating new teachers and sustaining the development of veteran teachers. She earned a master’s degree in reading education at Michigan State and collaborated on designing and teaching an exciting program to teach study skills to first-generation students in agriculture. Her first book, with the provocative title “Making It in College,” grew out of that course. Her real gift was supporting people learning to teach. During a sabbatical year at Stanford, Judy worked as a research assistant to the psychoanalyst Bruno Bettelheim in his work on children’s reading errors. She became an outstanding mentor and coach for aspiring teachers in Michigan State’s ambitious Teacher Corps program, serving for several years as a “clinic professor.” She also followed her MA in reading with graduate study that focused on educational ethnography and the development of cases. This orientation toward cases and ethnographic inquiry laid the foundation for the rest of her professional life.

When the family arrived in the Bay area in late 1982, Lee was teaching at Stanford and Judy found a part-time position as a research assistant at the Far West Regional Educational Laboratory in San Francisco. Over time, that position grew into a role as a senior research associate and program director. In that position, she created the Institute for Case Development in Education which became a national and international resource. During her 25 years at WestEd (to which the Lab had changed its name), she published many articles and seven teacher casebooks plus her classic Case Methods in Teacher Education which was also translated into Chinese. In 2004, she received the national award for Applying Research into Practice given annually by the American Educational Research Association.

Judy particularly enjoyed teaching about the development and use of cases all over the United States and across the world. In Israel and in Norway, in Taiwan, Hong Kong and Shanghai, and from San Francisco to New York, she offered well attended workshops and seminars.

Judy was predeceased by her mother and father, Joe and Ethel Horwitz. She is survived by her husband of 60 years, Lee Shulman, her children Allen (Debby Dresner) Shulman of Northbrook, IL, Adina Shulman of Santa Monica, and Daniel (Lisa Weingarten) Shulman of San Diego, grandchildren Joey, Jordy, Becky, Sam and Sarah, as well as her brother Dr. David Horwitz (Essie Waxler) of Los Angeles and her sister Barbara Hoffman (David) of Highland Park and Boca Raton, as well as many loving nieces and nephews.

Photo Gallery
0 photos Upload a photo
Remembrances
1 entry Submit a remembrance
From Mary Felstiner
Jan. 23, 2021
Judy was surely the most loving and generous person anyone could imagine – an active participant in community groups and a profound friend. She and Myra Strober and I used to meet For breakfast every month at Joanie's Café on California Ave., Palo...
Read more
About this site     Contact us