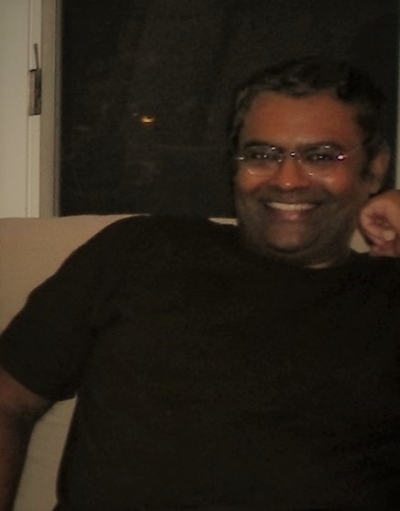 John Vasiharan Arulanantham passed away peacefully at his home in Palo Alto, CA on October 5, 2019. John was born in Jaffna, Sri Lanka and lived in Burma, Iraq, Sri Lanka and Pakistan as a child before moving to Southern California in the 1980s and attending the Harvard school in Los Angeles, while living with his cousins in Studio City. John retained a lifelong attachment for Harvard-Westlake and it’s alumni community. He was an avid tennis player and in his one and only year at the school, made the Varsity team.

Following high school John entered U.C. Berkeley as a Chancellor’s Scholar, where he graduated with a degree in Economics. He then spent a few years in consulting and banking in Los Angeles and San Francisco before walking away from the corporate world. He also worked for a short while at Stanford University in the years after his time at Berkeley. Closer to the end of his life, John lived a more simple existence - particularly after a serious heart attack in 2009 compromised his health. He enjoyed playing chess, discussing religion and politics and entertaining his four nieces and nephews who were very fond of him. Over the years, he also enjoyed frequenting Palo Alto's many parks and the shops along California Avenue - particularly Starbucks and Antonio's Nut House. John was strong willed and lived life on his own terms. He is survived by his parents Vijayan and Rohini Arulanantham, and younger brothers Ravi Arulanantham and David P. Arulanantham and their families.

Photo Gallery
0 photos Upload a photo
Remembrances
0 entries Submit a remembrance
Memorial service
Funeral services were held on Saturday October 12, 2019 at All Saints Episcopal Church in Palo Alto.
Make a donation
In lieu of flowers, the family is asking for donations in his name to organizations working to combat hunger and homelessness: All Saint's Church: https://www.asaints.org/resources/support/ Ecumenical Hunger program: https://www.ehpcares.org/donate.html
About this site     Contact us