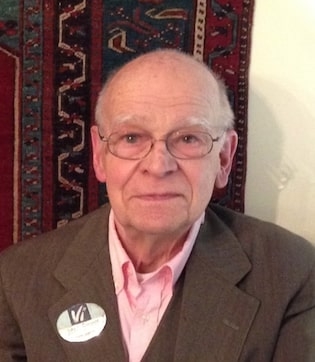 John Lambert Sommer, M.D. (93) died on September 1, 2020, from the effects of a stroke, at his home in Palo Alto. Born on a farm outside Pekin, IL, and raised as a Mennonite, he was the youngest son of the late Nora Sommer (Lambert) and O.J. Sommer. He married Donna M. Sommer (Meddaugh), M.D. on June 14, 1953. Surviving are younger son Matthew and daughter-in-law Ih-hae Chang (of Stanford, CA), and grandchildren Anne and Joseph. He was preceded in death by his older son Andrew (2012) and wife Donna (2017).

Drafted by the Army in 1945, John served as a noncombatant in various stateside posts, including New York City, where he was enthralled by the Museum of Modern Art. In 1948, John participated in a bicycle tour of Europe with the American Youth Hostels, during which he saw the bombed-out cities of Germany and other scars of World War II.

John received his undergraduate (1948, 1950) and medical (1953) degrees at the University of Chicago, where he met wife Donna. Sons Andrew and Matthew were born in Chicago. He taught and practiced urology at the University of Chicago’s School of Medicine until 1966, when the family moved to Fremont, CA and he and Donna joined the Permanente Medical Group and began practicing medicine at Kaiser’s Hayward facility. He also served as Physician-in-Charge of Kaiser’s Fremont Medical Offices for several years. He retired in 1990. In 2005, he and Donna moved to Palo Alto.

John’s passions were travel (including Europe, Turkey, Central Asia, Russia, China, Japan, Armenia), listening to classical music, and collecting textiles. In retirement, he became active in the world of Oriental rugs and participated in many related organizations. He served as president of the San Francisco Bay Area Rug Society for ten years and also as Secretary General of the International Conference on Oriental Carpets. He was a trustee of the Textile Museum in Washington, DC and a member of the Board of Directors of the Textile Arts Council of the Fine Arts Museums of San Francisco.

John was particularly fascinated by the textiles and nomadic culture of Kyrgyzstan, which he visited eight times, beginning in 1992. He published two books stemming from that experience: "The Kyrgyz and their Reed Screens" (1996) and "Klavdiya Antipina, Ethnographer of the Kyrgyz" (2002, with Bibira Akmoldoeva).

For the present, no memorial service is planned. In lieu of flowers, donations in his memory can be made to the Kauffman Museum (North Newton, KS), the Fine Arts Museums of San Francisco, or a charity of your choice.