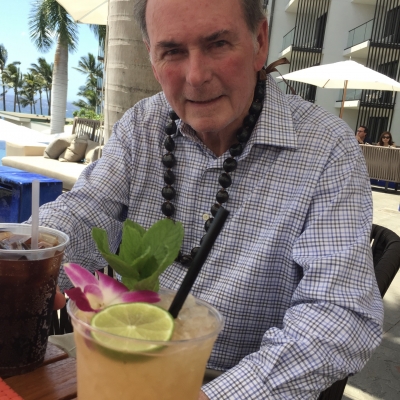 John “Jack” Murphy was born in Wellesley, Massachusetts to John Patrick and Catherine Marie Murphy. “Little Jackie” was a bright boy who started kindergarten at age four and was known to take the bus around Boston by himself at a young age. At school, he sometimes caused trouble with the nuns for being “too clever”. Jack loved telling stories and one of his favorites was the time his teacher nun put him in the corner with a dunce hat on. Jack went on to study at Tufts University in Boston, but left before graduating to join the workforce at Honeywell working in the stockroom until he got his first big break in sales.

Jack met the love of his life and wife of 50 years, Lee at the age of 22 when they met on a blind date and Lee was a stewardess for TWA. Jack loved to “check out” of work on a Friday and fly with Lee to tropical locations and was proud of his tan when he returned to snowy Boston on Monday for work. Jack went on to have a great career in sales at Wang Laboratories and eventually made his way to the West Coast. Jack joined Apple Computer in 1984 and knew that they were destined to change the world! After an almost 10 year run at Apple, Jack left and had several CEO jobs at Practical Peripherals, Prometheus, and Cohesion Systems. But perhaps his greatest career accomplishment was his business partnership with Lee as the CFO for Calla. Lee and Jack launched several very successful boutiques together including Calla in Menlo Park and Los Altos, Pink Wasabi in Carmel and Newport Beach, and Kicks in Menlo Park, where Lee runs the business today.

Jack loved spending time with his family above everything - at the dinner table, on vacation to Hawaii or Mexico (Jack loved the beach), conversation over a coffee or a cigar, or supporting his children’s passions. Jack was a great story teller, advice giver, and listener. Jack is survived by a wonderful modern family: Wife, Lee. Brother Jeff and sister-in-law Mary, brothers-in-law and their wives, Jim and Carol Press and Jeff and Eileen Press. Oldest son Matt and his wife Laura and their three children, Sara, Nolan and Ben. Middle daughter Abby and her daughter Catie, Abby’s partner Rick and his three children Kelsey, Taylor, and Rylee. Former son-in-law Trent Collins and his partner Cristina. Youngest son Ryan and his wife Tracy.

Jack was a man who lived life with joy and intensity. The last eight years were challenging as Jack managed through having Parkinson’s disease. Jack’s family is appreciative of the care he received during his last year of life at Villa Fontana. In lieu of flowers, the family asks that you consider a donation to the Parkinson’s foundation or make a visit to say hello to Lee at Kicks in Menlo Park and share a funny story or fond memory about Jack.