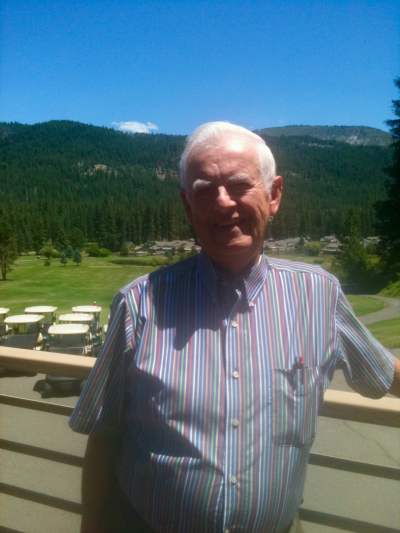 John Benjamin Licata 91 years old passed away on January 16, 2021, after suffering from complications from a fall at his home in Clio, Ca.

John was born in Akron Ohio to John and June Rita Licata. Hw grew up with his brother Robert Samuel, “Bob”, Licata and his step sister Marsha in Menlo Park California. He attended Las Lomita and Sequoia schools before attending college at Stanford University majoring in economics and business. He was a member of the Theta Chi fraternity where he was active playing volley ball, base ball, and golf. He returned to Stanford for his MBA after completing his service with the Air Force as a First Lieutenant. He loved finance and followed his father to Standard Oil, leaving to begin a long successful career as CEO of Sonoma Securities.

He met the love of his life in Manhattan Beach California. Jeannie Wright a gorgeous brunette was a registered nurse and United Airlines stewardess. John wrote her frequently talking about their dates, books they enjoyed, dinners out, and always saying that he missed her. They were married in July 1957, in Reno Nevada. John was an adept Black Jack player and used his winnings to pay for the wedding. They settled in the Palo Alto-Menlo Park area with their two children Marisa and John Anthony who both attended local schools before the family moved to Sonoma in their teen years.

John will be remembered for his passion for politics and discourse. He could often be found at eateries in Truckee and Graeagle conversing with tourists and locals.

In addition to his wife Jeannie, John is survived by his brother Bob, his children Marisa and John Anthony, and his grand children Grant John Licata and Allegra Lynn (Licata) Files. He was preceded in death by his parents John and June Rita Licata.

John will be interred at a VA cemetery at a later time with a full color guard as befits a Korean War vet. Donations to the Sierra Club can be made in his name.

Photo Gallery
0 photos Upload a photo
Remembrances
0 entries Submit a remembrance
Make a donation
act.sierraclub.org
About this site     Contact us