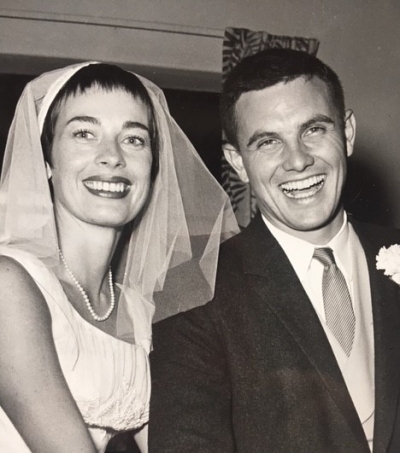 Jerome Peter “Jerry” Cronin of Menlo Park passed away on February 4th, 2020 at the age of 87. Born in Montclair, New Jersey, to parents Marie Naulty and William Parks Cronin. He grew up in Essex Fells, New Jersey with his two brothers John and Bill and sister Mary. He had an adventurous childhood sailing up the coast of Long Island in small boats with his brothers for days at a time and hiking through the woods in Essex Fells with his friends and family. At seventeen he read an article in Life magazine about smoke jumpers in Montana and decided that was for him, so he loaded up his car and traveled to Missoula, Montana to try and become a smoke jumper. Much to Jerry’s dismay his mother didn’t have the same enthusiasm, wrote a letter to the bureau of land management forbidding her son from becoming a smoke jumper. The smoke jumpers sided with his mother.

Jerry attended Lafayette College in Eastern Pennsylvania, where he played football and was a member of the Chi Phi fraternity. After attending Lafayette, in 1954 Jerry enlisted in the Navy to become a Marine corps pilot, moving up the ranks to Captain. He had a love of flying that lasted for many years. After an honorable discharge in 1958, Jerry moved to Southern California where he met and married Donna Conlon. They lived in Palos Verdes where they started a family and Jerry began his career in radio ad sales.

In 1965 they moved to Menlo Park with their five children. While selling radio ad time, Jerry saw a need to integrate computer technology into the advertising world and teamed up with a computer programmer, Gary Davidson, and in 1969 they started Marketron. Jerry and Gary were trail blazers in the media business and their solutions are still incorporated into the largest and most successful media organizations in the country. Jerry brought his love of flying into the business, purchasing a WWII era DC3 to haul the large computer equipment in the fuselage. He’d fly into towns demonstrating Marketron’s solutions to prospective media buyers, fire the plane back up and travel to the next town. In 1998 they moved the business to Hailey, Idaho where it still resides. In 2000 Jerry and Gary sold Marketron to Buy Media group. Jerry was a visionary in the media world, he was a pioneer in the early nineties when he incorporated wireless technology into laptops that ran the Marketron solution. He even attempted to integrate virtual reality into one of the applications. He touched and influenced the lives of hundreds of employees and clients that worked with Marketron over a thirty-two-year period. He and Gary created a unique culture at Marketron that still lives on today.

Jerry had a passion for adventure. One day he decided to sail solo to Hawaii, so he purchased a 34-foot yacht, spent years fixing it, learned to sail in the Bay and in 1993 he successfully sailed from San Francisco to Hawaii, arriving in 26 days much slimmer and never to eat canned peaches again. He took many long-range bicycle trips down the coast with friends and after he retired, he took up paragliding at the age of 74.

In retirement Jerry turned his creativity to art teaching himself to weld, fire ceramics and blow glass to create some spectacular pieces of art sculptures that adorn his backyard.

Jerry and Donna had a love for the outdoors throughout their marriage. They spent a good portion of their time in Sun Valley, Idaho playing golf, tennis, hiking and having some legendary cookouts in the Sawtooth forest. Jerry will be remembered for his great sense of humor, extraordinary storytelling and his love for a good time.

Jerry is survived by his wife Donna of 62 years and his five children, their spouses and his nine grandchildren: Tracy of Albuquerque, NM, Matthew of Berkeley, CA, Kelly of Hobart, WA, Michael of Hailey, ID and Patrick of Lafayette, CA. He is also survived by his brothers John Cronin of Newport, CA and Bill Cronin of Diamond Bar, CA.