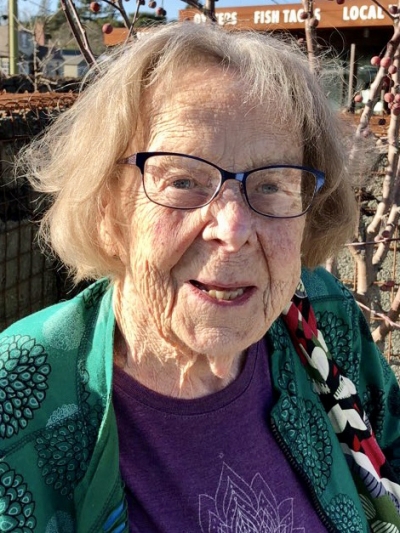 Jeanne Marie Sliney, a resident of Palo Alto from 1968 to 2000, passed away on July 6 in Santa Rosa, CA, from complications following a stroke. She was 89. Retaining her brave and independent spirit to the last, she is survived by eight children, all of whom grew up in Palo Alto under her loving roof.

Jeanne was born Jeanne Marie Deloskey on March 3, 1931, in New Jersey. Later, her family moved near Boston, and she graduated from Cambridge City Hospital School of Nursing in 1951. Jeanne married her high school sweetheart (John Leo Sliney, d. 1997), and the family relocated to California, settling in Palo Alto in 1968. The family lived in Southgate, on Miramonte Avenue, a short walk to Paly High. The house was famous for the streams of children seen coming and going. Thoughtful conversations were a hallmark of the home as Jeanne actively supported a number of social causes, including the rights of the United Farmworkers in the 1970s. She inspired her children to volunteer at the Palo Alto Recycling Center when it first opened. A sight to behold was the family and friends serenading the neighborhood with Christmas carols each December. The children attended one or more of Garland Elementary, Jordan Junior High and Paly High.

As her children left the home and she divorced, Jeanne returned to school. She earned an Associate Arts degree in geology from Foothill College. Her newly found passion for the natural sciences inspired her to explore many regions of the world, including Baja, Nova Scotia and Europe. In her later years, she discovered the joys of painting, tai chi and goddess studies. In 2000, Jeanne moved to Santa Rosa, CA, for its scenery and to remain near the soothing shores of the Pacific Ocean. Rarely a week passed that she did not venture to the calming vistas of California’s north coast. Her gentle bravery, strong independence and unwavering hope for a more just society shall continue to inspire all who hold her close to heart—and there are many!

Memorial services will be held at a future date. Kindly consider comments to the Tribute Wall, they will bring comfort to the family (www.DanielsChapeloftheRoses.com). In lieu of flowers, please consider a donation to Jeanne’s well-loved Sonoma County Parks in the name of Jeanne Sliney (SonomaCountyParksFoundation.org).