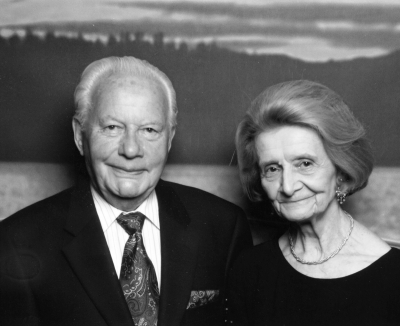 Jean Le Gall was a self-made man in every sense. Born on a small farm in the village of Ty Moter Vras in Brittany, France, much of his youth was spent under the cloud of WWII. He played a part in the French Resistance and after the war, joined the French army in French Indochina, where he spent 3 years as a morse code operator. After completing his military service, with only a third-grade education and fifty dollars to his name, he left his native France for New York City at the age of 29 to embark on a new life.

After finding work, Jean enrolled in English classes and quickly became proficient with his new language. He found work as a server in cafés and later in renown restaurants, where he was recognized for excellence. During this time, he completed his high school equivalency diploma after which he enrolled at the City College of New York. After earning his BS diploma in Solid State Physics, Jean joined Transitron Electronics in Boston. There, he met and married his wife Micheline. He also became a proud US citizen.

Two years later, Jean and Micheline moved to Palo Alto, California, where Jean went to work in the R&D division at Fairchild Semiconductor. He studied in the evenings and received his MS in Solid State Electronics from San Jose State University. Jean served as president of the “Ingenieurs et Scientifiques de France (ISF)” Bay Area chapter for 25 years; he was recognized by the French government for his leadership and was awarded the “Croix de Chevalier de L’Ordre Nationale du Merite” in 1975.

Jean retired in 1997 from Philips Semiconductors (formerly Signetics) after a career marked with accomplishment and achievement. He and Micheline spent the next many years traveling, entertaining, tending to his garden and enjoying their Palo Alto home. On the back patio, good times prevailed as friends and family shared Jean’s passion for wine, oysters, a rare filet mignon or seared ahi, and Micheline’s wonderful desserts.

Jean is survived by his loving spouse of 59 years, Micheline, and their two children, Carole Le Gall and Annick Le Gall (Adam Ratner). He also leaves behind his much-loved granddaughter Emma Ratner and his beloved sister, Oliva Masse.

A celebration of Jean’s life will be held at a future date (TBD). Please email [email protected] for additional information or to contact the Le Gall family directly.