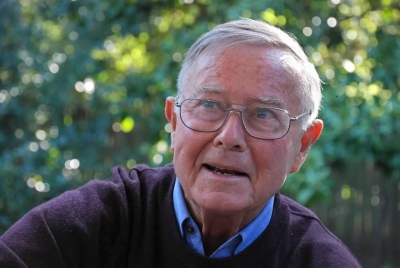 Jean Martin Goity died peacefully in Palo Alto on June 15 at the age of 90.

Jean is survived by his sons Roland and Larry (Trish), his daughter Carol Olson (Steve), and four grandchildren: Sam, Rose, Chad, and Mira. He was preceded in death by Emery, known as “Mimi,” his beloved wife of nearly 56 years.

A 42-year resident of Woodside who moved to the Bay Area in 1960, Jean lived in Palo Alto for the past eight years. He grew up in La Puente, CA, the son of Basque immigrants Jean and Veronique. He graduated from Whittier High School, where he was the student body president, before working on his family’s avocado ranch for six years. He then served in the US Army for two years before attending and graduating from Claremont Men’s College, where he was class president.

Jean spent his professional career in investor relations, including the last 20 years at Utah International/BHP. He developed many lifelong friendships and was renowned for his story telling. Baseball was one of Jean’s greatest passions. He played second base for his college team, and played in Palo Alto recreational leagues upon moving north after graduation. Jean became a staunch supporter of the San Francisco Giants, and organized annual trips to Arizona for Spring Training games.

Jean was proud of his Basque heritage and enjoyed visiting relatives in and around his ancestors’ home region of Ustaritz, France. He treasured time with his family and took great joy engaging with his grandchildren about their school and other interests.

Photo Gallery
0 photos Upload a photo
Remembrances
1 entry Submit a remembrance
From Jacklin Albert
July 9, 2021
Rest in peace! Jean Martin Goity was a good man. He lived his life according to his morals and values. He was a decent man with a healthy lifestyle. May God give his family the strength to deal with the loss. Just like Jean, people need to live happi...
Read more
Make a donation
Memorial donations may be made in his name to the Giants Community Fund: https://www.mlb.com/giants/community/fund
About this site     Contact us