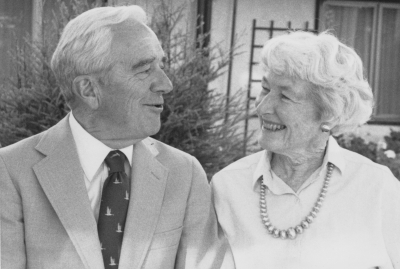 Jean Yuill Clark, resident of Palo Alto and Portola Valley for 89 years, died quietly on April 10 at the Sequoias, surrounded by her extended family.

Jean was born on November 14, 1919, in Los Angeles to Ruth Carson and Peter Yuill. Just months before Jean?s birth, her father was diagnosed with a recurrence of childhood TB and was only allowed to see Jean through a glass doorway, before dying when she was just 15 months old.

Her mother Ruth, with baby Jean, moved to the San Francisco home of her parents, Minnie and Ed Carson. Minnie, the eldest daughter of pioneer John D. Daly, formed a close bond with Jean, caring for her during her early years. Jean was the first great grandchild of John Daly, successful rancher and businessman whose dairy ranch became Daly City. Jean was proud of her Daly lineage, especially that her Great Grandfather delivered free milk to the children of San Francisco and opened his ranch to those left homeless after the ?06 earthquake.

When Jean was four, her mother married banker Charles Judson Crary, famed for giving Bill Hewlett and Dave Packard their first business loan. The couple settled in Palo Alto, then a small college town of 13,000, in a colonial house on Coleridge Street and soon added four children to the family. Jean attended Addison, Walter Hayes, and Palo Alto high school. The Crary family also built a redwood cabin on the remote, then unpaved Old La Honda Road where they spent many summers, swimming daily at Lake Searsville, in lieu of showers, when the springs ran dry.

In her junior year at Paly, Jean met the love of her life, William H. "Bill" Clark, who had recently moved to town after his parents? deaths. Senior year, Bill, a natural politician, was elected student body president while Jean became Commissioner of Girls Activities. She liked to say that together, they ran the school. This began a long and happy partnership that lasted until Bill's death in 2011, just short of their 70th anniversary.

In 1936, Jean enrolled at UC Berkeley, graduating Phi Beta Kappa with a degree in Social Welfare. She was an Alpha Phi, while Bill lived close by in the Delt house. Their relationship blossomed. With the uncertainty of war, they decided to marry in September 1941, living in San Francisco while Bill completed his studies at Stanford Medical School. Jean worked for Alameda County Charities until she became pregnant with David, the first of three sons. The following year, her daughter Carolyn was born in August 1945, one day before Bill left for a year in China in the U.S.Navy Medical Corps.

In 1947, Bill became a partner at the Palo Alto Medical Clinic and they returned to Palo Alto. By 1952, two more sons, Peter and Bruce, were born. Jean loved family life and felt fortunate to raise hers in an era when large families were the norm. Jean always felt they lived in Palo Alto during its golden years.

Besides devoting her time and energy to her children and later, her grandchildren, Jean was an active partner, supporting Bill?s years on the Palo Alto City Council, and also as Chief of Staff at Stanford Hospital. She was a gracious hostess orchestrating innumerable gatherings of Palo Alto leaders, family celebrations and as well as housing foreign students. She was active in the Stanford Medical Auxilliary, Children?s Health Council, PEO, and the Palo Alto Garden Club.

Jean?s love of nature, redwoods and the Jasper Ridge area developed into a lifelong interest in conservation and a passion for birding that she shared with Bill. They were in the first docent training group when Stanford transformed Searsville Lake into Jasper Ridge Biological Preserve, and together, they founded the birding program, maintaining the bird count list until Bill?s death in 2011.

Birding and family also focused much of Bill and Jean?s travel which included multiple trips to Europe, Africa, Hawaii, the Southern Hemisphere, and extensive exploration of the mountains and waterways of California and the continental United States.

Jean was always known for her kind, loving and gentle way and was referred to as ?Serene Jean? by old friends. Even during a long struggle with Alzheimer?s, she never lost her dignified grace, cheerfulness, and spirit of gratitude.

Jean was preceded in death by her husband, Bill, in 2011 and by her sons, David Clark and Peter Clark, in 2012. She is survived by her children, Carolyn Clebsch and husband, Bill , of Menlo Park; Bruce Clark and wife Debbie Christman Clark, of Novato; nine grandchildren and three great-grandchildren as well as two sisters, Eleanor Crary, of Portola Valley; and Carolyn Nowell, of London.