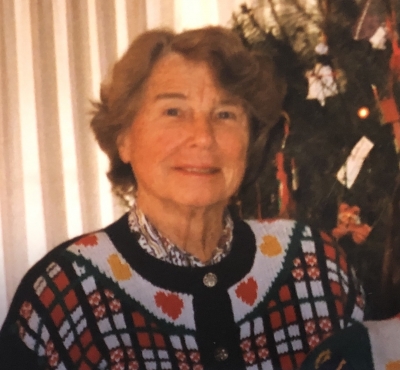 Janet McClure Lyman, a resident of Palo Alto for more than sixty years, passed away peacefully of natural causes at age 95 on March 18th, 2021, in Petaluma, California, where she had lived since 2018.

Janet came to Palo Alto from the east coast. She was born on October 9th, 1925, to Thomas Harvey McClure and Ada Gibson McClure (neé Titus) and grew up in Pelham, New York with her older sister Barbara. She attended Wheaton College, from which she graduated with a bachelor’s degree in economics and a minor in English and German and then earned a certificate from the management training program at Radcliffe College (a graduate program for women which later became part of Harvard Business School).

She married John Hilton Lyman (who passed away in 1998) in 1949 and moved to Palo Alto with him shortly afterward. Over the course of their 25-year marriage, they had three children, Kate, Amy and John. Janet spent most of her career in the accounting department of Lockheed Martin, where her duties included financial analysis and data maintenance of contracts and classified materials. In retirement, she traveled extensively through Europe, enjoyed visits to her family and friends near and far, enjoyed gardening at home, hiking across the Bay Area and being an active member of her local community.

She supported her faith in democracy, literature and her church in many ways. She served as a President for the League of Women Voters, a President of the American Association of University Women of Los Altos and was a longtime vestry member at Christ Episcopal Church of Los Altos. She used her natural gifts as a vocalist to contribute dozens upon dozens of audio books for Recording for the Blind and Dyslexic in Palo Alto. She had a deep fondness for the MacNeil/Lehrer News Hour, coffee ice cream and hummingbirds.