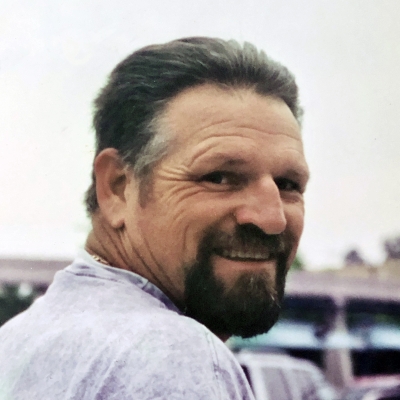 Jim grew up in Palo Alto and attended Ford Country Day School, Our Lady of the Rosary School, Cubberley High School, and Foothill College. Jim and Kathy met at Cubberley and they recently celebrated their 45th wedding anniversary.

By trade, Jim was a brick layer for Pete Wismann Masonry and his skillful work can be seen throughout Palo Alto, Stanford University, and Napa Valley, to name just a few locations.

Jim’s greatest devotion by far was to his family. He and Kathy have four children, Rebecca, Amy, and Matt and his wife Nicole. He loved his immediate and extended family deeply and there was no end to his generosity and care toward them.

One of Jim’s favorite pastimes was to drive with Becky to the Century Theater to procure movie popcorn and hotdogs to be enjoyed with a movie on the sofa at home along with family and his sweet pups Abbe, Pickle, and Gary.

Jim never knew a stranger. He would strike up friendly conversations with anyone, anywhere including poolside at Dinah’s, every line at Disneyland, and the grocery store. He had tales to tell and advice to lend to everyone. His handshake and warm smile were legendary. He disliked bees, especially a certain one in southern California, and he had zero patience with cheeky rats in costume, but that one costume aside, Halloween was his most favorite holiday.

Jim was an avid golfer since childhood and played courses throughout Palo Alto and the wider Bay Area as well as in Colorado. He also coached youth baseball in Palo Alto and played for the Bug Busters baseball team. He was a lifelong fan of both 49er and Stanford football and we will always associate the Stanford Band signature song with Jim.

In addition to his wife and children, Jim is loved and survived by his parents, Pete and Cessie Wismann, by his sisters Terry Wismann, Debbie Gualtieri, Cessie Ann Wismann, and Kris Wismann, by his sisters-in-law, Lyz Baumiller and Theresa Frost, his brothers-in-law Dave Baumiller, Tom Frost, and David Dunham and by his nieces and nephews, Davey Baumiller, Julia Caswell, Nikki Dunham-Hoshida, Brian Frost, Aron, Peter, and Michael Fukuhara, and Sarah and Ryan Gualtieri, Jim is also survived by other extended family and by the countless friends he made everywhere he went.

A celebration of Jim’s life will be held at a later date. In Jim’s memory, charitable donations may be made to Umbrella of Hope pet rescue organization in Contra Costa County to honor his support for pet adoption, especially for those animals with special needs. www.beourpet.org

Photo Gallery
0 photos Upload a photo
Remembrances
2 entries Submit a remembrance
From April Hoppa
June 2, 2021
our trip to las Vegas On the short flight Jim got to pass out the peanuts. we all could not stop laughing. we walked down the whole strip, getting drinks whenever we ran out. called a cab to take us back. a really fast ride with 4 drunks in the car...
Read more
Memorial service
A celebration of Jim’s life will be held at a later date.
Make a donation
Umbrella of Hope www.beourpet.org
About this site     Contact us