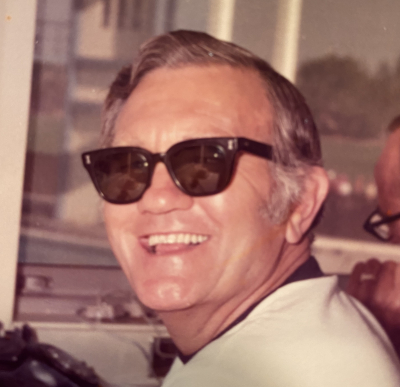 Jack Lanier Hoover, Palo Alto citizen for over 65 years, died on May 9 in his home. He was born on July 29, 1923 in Mt. Calm Texas, a small farming and cattle town. He served in the 36th Texas division in WWII in Europe, liberating northward through Italy, France and Germany. After the war he played football for the European Theater of Operations in Germany, winning honorable mention. He was then recruited to play football for the University of Chattanooga. At UC (now UTC) he met his wife, Doris Lyons, “the love of his life,” and was active in campus politics, serving as president of Phi Delta Sigma Fraternity, Vice President of the Student Body and President of Blue Key Honor Fraternity.

After college, Jack and Doris moved to Palo Alto, CA for Jack’s job as the west coast sales representative for Cumberland Case Company of Chattanooga and Jack worked for them until he retired at 65, covering the western states including Hawaii and Alaska. Jack was active in local politics and volunteered as an announcer at Palo Alto swim and diving meets. He also loved to build and fix things and work in the yard of his beautiful Eichler house. After retirement Jack had modest success as an actor in commercials until he turned to playing and organizing Senior Softball full time. He played in nine National Senior tournaments and founded the Northern California Senior Softball Association, later becoming their first Hall of Fame recipient. He also traveled with softball teams to Europe and New Zealand in order to promote the sport for seniors worldwide. When he was not swinging a bat or hanging out with his friends on the softball team, he was traveling with Doris across the world, from New Zealand to Kenya to Portugal. He is survived by daughters Tamis Hoover Renteria (Beto), Shawn Lanier Hoover, (Don Dilley), and Tegan Lyons Hoover as well as grandchildren Lucas Renteria, Ellie Renteria, and Piper Hoover Mundy. He is also survived by his close companions and partners in mischief, David Stephens and Timothy Stephens.

Photo Gallery
0 photos Upload a photo
Remembrances
0 entries Submit a remembrance
Memorial service
No formal service. A private celebration of his life will be held later. Friends and family will be informed.
About this site     Contact us