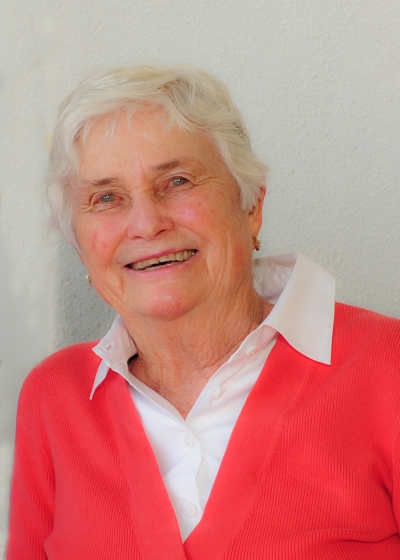 Isobel Jean Smith was born March 21, 1931 in Oxnard, California. Her parents, Jean (Lawrie) Smith and William Smith had emigrated from Scotland and her Scottish roots were celebrated throughout her life. Isobel had the good fortune to grow up on the Limoneira Ranch in Santa Paula. Her early years were spent playing in the fields, riding horses through the trees and enjoying rural life.

After graduation from Santa Paula High School, she traveled north to attend UC Berkeley as a member of Alpha Chi Omega sorority, thus starting a love of all things “Cal”, and the colors blue and gold. After college she lived in San Francisco, and became a member of The Spinsters. Luckily, she was invited to play tennis with a Bachelor, Herman Christensen, Jr, and love was found on the tennis court. They married in 1960 and quickly built an amazing house in the hills of San Carlos. Their four children arrived and they soon needed more space so they built their family home in Atherton. Isobel and Herman joined the Circus Club in the early ‘60s and continued to play tennis, help out at swim meets and watch horse events. Isobel volunteered with Peninsula Volunteers and in the local schools. Later in life, she took up golf and they joined Menlo Country Club, where she fostered many strong relationships with other women golfers. Isobel was also a devoted volunteer at the Atherton Historical Society. She was thrilled with the arrival of each of her seven grandchildren, and by them, she was lovingly called “Scraggles”. Her pampering of her steady stream of bearded collies was legendary, and everyone who knew them wanted to be reincarnated as one of her dogs. She was also famous for her dry sense of humor and her clever, witty Christmas cards.

After Herman passed away in 2013, Isobel stayed home more, but surrounded herself with an incredible team of helpers and friends. Our family will be forever grateful for the support she received from all those who came daily or weekly to care for her and provide companionship and community. Isobel is survived by her daughter Maren (Bill Welch), son Gavin (Tricia), son Andrew and daughter Amy (Drew Curby). Her grandchildren Brady, William, Brian, Caroline, Alicia, Pierce, Ford and honorary grandchildren Maverick and Ryder will deeply miss their beloved “Scraggles”. She is also survived by her sister, Margo Holcomb, and her faithful bearded collie, Kat (the dog).

Photo Gallery
0 photos Upload a photo
Remembrances
0 entries Submit a remembrance
Memorial service
There will not be a public funeral; a private celebration of life will be held later in the summer.
About this site     Contact us