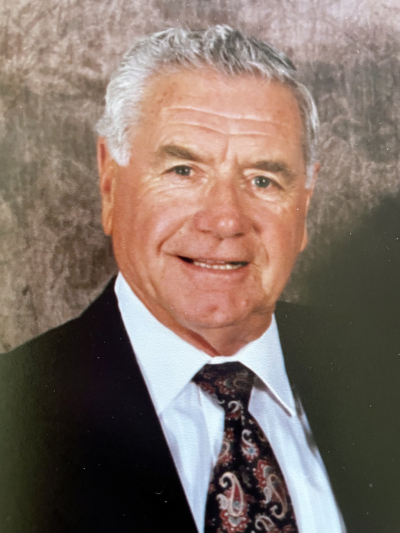 A longtime resident of Menlo Park, Guido Budelli, beloved father, grandfather, and great-grandfather, passed away peacefully in his home surrounded by his loving family. Born in Alameda, CA to Fortunato and Maria Budelli, he graduated from St. Joseph Elementary School and Sequoia High School. He served four years in the U.S. Navy during World War II.

Guido married Florence Camporelli in 1946. Together they raised their family in Menlo where they were active members at St. Raymond Parish. A trained mechanic, Guido worked at Freeman-Sondgroth Paving Co. for many years and later moved on to BFI in San Jose where he became an equipment supervisor. Guido, an accomplished athlete, was also heavily involved in fast pitch softball traveling with his family to ballparks around the state from the Bay Area to Sacramento to Fresno.

In retirement Guido traveled with Flo, took up golf, and was the family's “go-to” all around handyman.

Guido was preceded in death by his wife, parents, and brother Louie.

A special thank you to Malia “Tita” Ruocco for being Guido's dedicated caregiver.

Photo Gallery
0 photos Upload a photo
Remembrances
0 entries Submit a remembrance
Memorial service
A Memorial Mass in celebration of his life will be held on Thursday, August 4th, at 11 am at St. Denis Church, 2250 Avy Ave., Menlo Park
Make a donation
In lieu of flowers, please honor his memory with donations to St. Jude Children's Research Hospital 501 St. Jude Place, Memphis, TN 38105, or www.stjude.org or to a charity of your choice.
About this site     Contact us