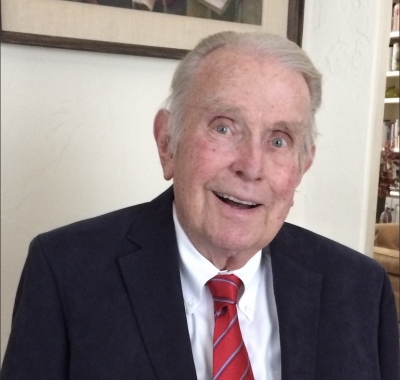 Grant Spaeth, a former Palo Alto city councilman and past president of the United States Golf Association, died on July 28 at 88 years old. His wife, Lori Spaeth, said the cause was from complications of Parkinson's disease.

Born on June 27, 1932, in Oxford, Spaeth came to Palo Alto when his father, Carl Spaeth, was appointed dean of Stanford University's Law School in 1946. He attended Palo Alto High School, where he would gain the nickname "Biggie," a name some of his closest friends continue to know him by. As an undergraduate at Stanford University, he played for an NCAA championship winning golf team in 1953. He then pursued a law degree at Harvard University.

When he returned to Palo Alto, Spaeth co-founded the law firm of Spaeth, Blase, Valentine & Klein, where he practiced business law, according to Lori Spaeth. During his time as a lawyer, he also served on the Palo Alto City Council from 1967 to 1971.

"The council at that point was very split," said Larry Klein, a former Palo Alto mayor who worked with Spaeth at the firm for about a decade. "(In the) classic Palo Alto debate between who wanted to see more development versus less development, Grant was down the middle."

He also served his community on the boards of senior services nonprofit Avenidas and the Los Altos Library Endowment, according to Lori Spaeth.

But his many appointments never eclipsed his passion for golf, which he played since he was a child. He was the United States Golf Association's president from 1990 to 1991. During his membership and his presidency, he helped establish the U.S. Mid-Amateur and U.S. Women’s Mid-Amateur championships and the USGA's Regional Affairs department, according to the association.

In 2011, he was inducted to the Northern California Golf Association Hall of Fame.

Spaeth was first married to Judy Bolender in 1954. He had two children, Charlie and Shelly Spaeth. He married for a third time in 1987 to Lori Travis, who he met through his friend Frank “Sandy” Tatum, a fellow Stanford alumnus, lawyer and also a former USGA president.

"He was a wonderful man, husband and friend," Lori said. "He was just one of the great ones."

Photo Gallery
0 photos Upload a photo
Remembrances
1 entry Submit a remembrance
From Peter B Pitsker
Aug. 2, 2020
Grant was one year ahead of me at Paly High and Stanford. I always looked up to him as an example of a cool and sweet guy. Years later I recruited him to join me on a recreation league basketball team in Palo Alto. Fun! RIP, Grant! You were one ...
Read more
About this site     Contact us