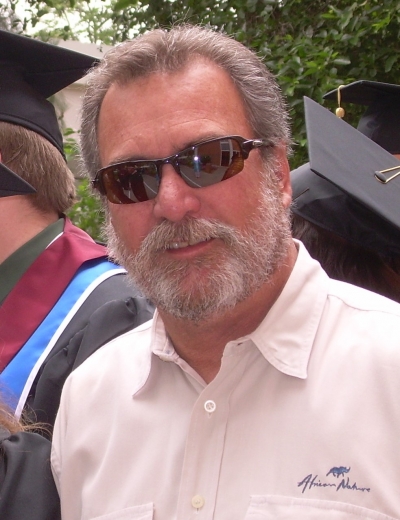 George Robert Schumann III, 61, recently diagnosed with stage four lung cancer, died June 20, with his family by his side.

Born in Palo Alto, George grew up in Mountain View, attending local schools and graduating from Los Altos High School in 1972. He learned the construction trade early on, working with Madlem Construction and eventually opening his own company, Westwood Design. Westwood built many local projects, ranging from residential kitchen and bath, to commercial tenant improvements, to building homes from the ground up. After he closed his own company, George took pride in the fact that one of his colleagues continued on to open his own successful construction company, still in business after two decades.

George was married to Georgie Gleim, of Gleim the Jeweler; they met when George's company did remodeling work for the store. After closing his construction company, George went to work for the jewelry store. Very good at organizing systems, George used this talent when he joined Gleim's and reorganized a number of the critical support functions for the company. They resided in Palo Alto, where George took ultimate satisfaction in applying his construction and design skills to remodeling their house into his vision of their home.

George loved mentoring people, whether family members, friends, people in the construction trade, or colleagues in his department at Gleim's, and was instrumental in teaching a number of people how to be responsible individuals and employees. One friend said, "Iâ€™m aware that George was always trying to help me. That's George's nature, and that's a rare attribute that very few possess." Many friends have commented on his big heart, his support for them in tough times and his ever-present sense of humor.

With Georgie, he learned to enjoy travel both domestic and international. On one of these trips, he was thrilled to be able to play the Old Course at St. Andrews. He made many good friends in the jewelry industry, and was able to enjoy a last trip to this year's Masters with some of these same friends.

George was a beloved uncle to Lacey and Gary Brown of Southern California; Jared and Emma Gleim of Perth, Western Australia; and Lisa Gleim of Southern California. He treasured his great-nieces and great-nephews: Jack, Reese and Trent Brown and Georgia Gleim, and they, in turn, loved his always-entertaining demeanor. He was predeceased by his parents, Bob and Beverly Schumann.

Photo Gallery
0 photos Upload a photo
Remembrances
4 entries Submit a remembrance
From Margery deFigueirefo
Sept. 26, 2016
My husband was His dad's boss and very close friend at The Redwood City Tribune for over 25 years. We watched Geoge grow up. His parents, Bob and Bev, were so proud of him. So very sorry to hear about this. May he rest in peace.
Memorial service
Rather than services, a celebration of his life will be held later this summer.
About this site     Contact us