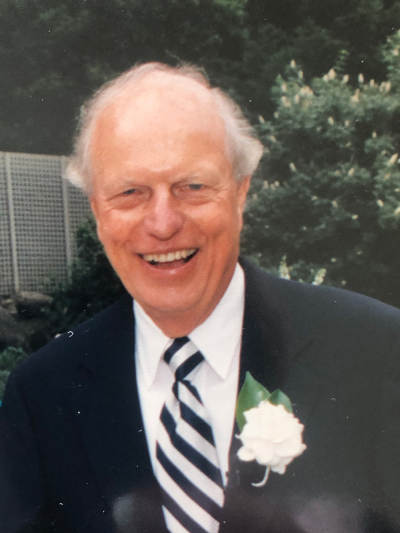 Gene was born at home in a brownstone on 86th Street in Manhattan 94 years ago to Eugene and Agnes Kramer Straube, young immigrants from Germany.  As their fourth child, arriving 15-20 years after his 3 sisters, and the only boy in the family, he was raised and pampered by 4 mothers rather than just one.

He attended Stuyvesant High School in New York City followed by Columbia University, where he earned both a Bachelor or Arts and a BS in Electrical Engineering and was awarded membership in both Phi Beta Kappa and Tau Beta Pi honorary fraternities.

At Columbia the 6 foot 3 inch freshman rowed Varsity crew and joined  the newly-formed Naval ROTC.  His leadership skills quickly made him Battalion Commander and he was presented with a sword and achievement award from the President of Columbia at that time, Dwight D. Eisenhower, honoring his outstanding scholastic and military proficiency. The photo from the front page of the New York Times of this event remained among his most treasured possessions.

In the Navy he served as Lieutenant Commander aboard the USS Gayot in the Mediterranean theatre during the Korean War and received the Navy’s Distinguished Service Award and European Occupation Ribbon of Honor.  He was stationed off Cannes, which had barbed wire on the beach at that time, and he was quite proud that the French Riviera never came under attack, other than by the sailors from his ship!

His years at Columbia and in the Navy remained significant to him throughout his life. He  established the Gene F. Straube scholarship fund for students in the School of Engineering and was a staunch supporter of Columbia athletics.  He loved returning to the campus for football games and reunions whenever possible, rain or shine, and wearing black Hefty bags to stay dry!

After completing his Navy service In 1953 his engineering career got off to an adventurous start as he moved to California to work with Howard Hughes at Hughes Semiconductor.  He chose to live in Manhattan Beach because it sounded like Manhattan. There he and his first wife raised three children.

In 1960 he relocated to Mountain View where he founded Straube Associates Inc. to broker electronic components between the manufacturers and the newly-developing computer industry in what would become known as Silicon Valley.

Gene remained active in his company for more than 50 years as President and later as Chairman of the Board and truly lived his motto that “if you do something you love you will never work a day in your life.” Today his son Chris continues the corporation and the tradition.

In 1993 he married the love of his life, Marie, in a story-book weekend wedding at Meadowood in Napa Valley. There Gene, always competitive, took first place in the croquet tournament he organized for the wedding guests! Their romance continued for more than 30 years of fun, work, adventures and travels together, including China, Bhutan, Nepal, India, Africa, Europe, Scandinavia, Dubai, South America, Russia, Malta and Cuba.

The ever-gregarious Gene made friends wherever they went and in many different circles, including Sharon Heights Golf and Country Club in Menlo Park and Bighorn Golf Club in Palm Desert, the Knights of St. John in San Francisco, Chaine des Rotisseurs International, and at Lake Tahoe where he and Marie loved to spend time at their “Little Bear Lodge” in Rubicon.

In addition to his love of travel, he also loved art, theatre, opera, tennis, hiking, skiing, golf, bridge, his employees, and people from all walks of life. He asked everyone he encountered what their name was and then went on to talk with them, sometimes attempting to do so in Italian, Japanese, or Spanish, or some Gino-combination of all three!

He had boundless energy, and channeled it to served on the boards of several corporations as well as President of the Electronic Representatives Association. He was an early member of the Band of Angels in Silicon Valley, mentoring start-up electronic firms in the early days of tech.

Gene had a kind, caring, and trusting nature, and served on the boards of Glide Memorial Church in San Francisco when Cecil Williams was pastor, the University of San Francisco School of Education, the Pacific Graduate School of Psychology, and Miramonte Mental Health Services, among others.

Gene was passionate about everything he did, and gave his all to every endeavor.  He never wanted to waste a moment of life or learning, and always had a book with him in case there was a quiet moment that needed filling. He spent his last evening at home playing bridge on the computer with Marie.

Gene passed away just one week after his 94th birthday party, where he was thrilled to meet his first great-grandchild who was just 21 days old. The photo of the four generations became an immediate family treasure.

Upon his passing, a friend described him as an American gentleman, the kind we no longer produce.He will be remembered by those who were fortunate to know him for his big smile, his energy, his charm, his love of life, and his love of people.

Photo Gallery
0 photos Upload a photo
Remembrances
0 entries Submit a remembrance
Memorial service
A private family service will be held.
Make a donation
Donations in Gene’s honor may be made to the charity of your choice or you may mail a check to Columbia University Gift System, PO Box 1523, New York NY 10008 and note it is for the Gene F. Straube Scholarship in the School of Engineering in honor of Gene Straube.
About this site     Contact us