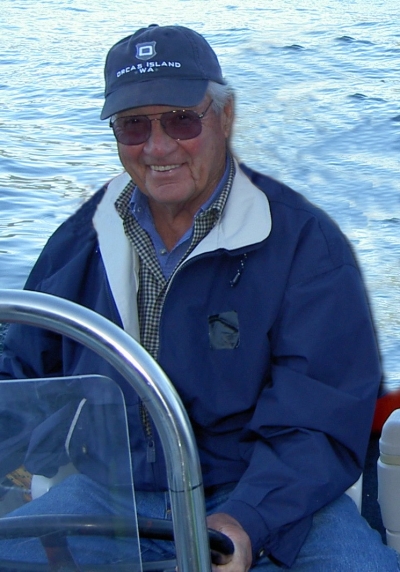 Long time resident of Menlo Park and Sun Valley, Fred Judd passed away peacefully in his sleep at his home in Borrego Springs, Ca on March 1, 2021 at the age of 95.

A lifelong outdoorsman who was active and vigorous and always good humored, Fred was a residential and commercial builder just as the mid-Peninsula building boom took hold. As a professional hobbyist, he pursued his love of hunting, fly-fishing, horseback riding and boating, and giving back to the communities where he lived.

Fred was born in Portland, Oregon on October 17, 1925 to parents Henry Clay Judd and Vera Temple Judd both originally from Pendleton, Oregon. Fred’s father Henry served in WWI in the European Theater. The family moved to Atherton, CA when Henry went to work for Standard Oil Co. in San Francisco. Fred graduated from Sequoia High School in Redwood City.

As a young boy, Fred spent summers working on the cattle and wheat ranches run by his uncle Roy Temple and aunt Thelma McClintock, near Pendleton, Oregon. He also worked in the salmon industry in Astoria, Oregon. While still a teenager, Fred and his friend Joe Whelan built a cabin out of rough-hewn logs near Skylonda. He also volunteered on the Pescadero Fire Department, working up an appetite for abalone sandwiches and slices of olallieberry pie at Duarte’s Tavern in Pescadero.

After the invasion of Pearl Harbor on December 7, 1941 Fred joined the US Navy, at 17 and served on the aircraft carrier, USS Marcus Island. He saw action in six battles, including the Battle of Leyte Gulf, one of the largest naval battles of the war. As a gunner on a 20mm rapid fire anti-aircraft gun, he was credited with shooting down multiple Japanese Kamikaze jets attacking the aircraft carrier.

After the war, Fred attended San Jose State on the GI Bill, graduating in 1950. There he met Esther Cameron. They were married in August 1951 and welcomed their son, Clay in 1954.

Early on, Fred was a carpenter and home builder with three subdivisions in Atherton - Clay Drive, Vera View, and the Donahoe property near Menlo-Atherton High School he developed with his friend Whelan. In the late 1950s, Fred started a grading and paving and heavy equipment leasing business, building roads in Redwood City, Atherton, and Ladera.

Fred enjoyed helping the growing community he lived in. He donated his time to build the first little league field in Portola Valley operating his own grading equipment. He was an active parent with Boy Scouts campouts. He also served as a past president of the Menlo Park Chamber of Commerce.

In the mid-60’s Fred went on to develop The Palo Alto Business Park, the first tilt-up commercial buildings constructed in Palo Alto east of Hwy 101 at San Antonio Road.

Fred had an infectious laugh and was an expert storyteller always looking for material in his adventures. Here are some favorites:

Fred and his good friend Ray Jacobsen were partners in the “Hummingbird” Bird Class sailing boat and spent many weekends sailing on San Francisco Bay with family and friends out of Sausalito Yacht Harbor as well as summer trips sailing up the San Joaquin Delta. He also loved hunting and fishing in northern California with good friends Sam Whiting, Bob Lewis and George Long and their annual opening day pheasant hunt. He was a member of Gordon Knapp’s duck club known as the “Alviso Hilton” along with good friends Don Broesamle, Jim Nystrom and others. He and his family loved their annual ski trip to Sugar Bowl with Stan and Kiki Hiller and sons. He often spent summers living out of his camper while fly fishing rivers of Montana.

In the summer of 1971, Fred and his son each piloted two of Fred’s wooden Rogue River float boats down the Middle Fork of the Salmon River, class IV rapids, known as “the River of No Return” with his friend Don Wells and son Donnie. Fred and Clay also floated Hells Canyon of the Snake River, class IV rapids, fishing and hunting with good friends Charlie Shriver and Stoney Burke.

In 1972, Fred and Esther moved to Sun Valley, Idaho and built one of the first homes on the golf course. He became active in helping his rapidly growing community. He served on the Sun Valley City Council and was part of the volunteer Fire Department.

He loved steelhead fishing on the Salmon River and Dean River in BC. In 1975 Fred built a log cabin and barn on his beloved Grove Creek near Picabo, ID. He liked searching for indian arrowheads after big rains. Fred also collected old farm tools which he called his “whatsits”.

Fred married Katharine Long Bishop October 14, 1986 and they had many wonderful years of marriage. Fred took Katharine’s teenage sons Scott and Brett under his wing and shared with them his love of the outdoors.

Fred and Katharine lived many years in Sun Valley while later wintering in Borrego Springs, CA. They spent summers fly fishing and floating rivers in Idaho and Montana and other western states. In later years they skippered power boats in the San Juan Islands, WA. and the Gulf Islands, BC.

They cruised on their boat, the “Kathalina” with family and friends. They also spent many summers on Orcas Island where Fred liked to go crabbing in his jet boat. Later in life Fred explored the Anza Borrego Desert with his friends and family on his ATVs and his vintage bronco.

Fred aka “Ferd The Bird” will always be remembered for his love of life, his gusto in pursuit of making dreams happen, his generosity, kindness, and his exceptional quality of making good friends wherever he went. He lived by what his mother always told him, “work hard, play fair, and make every man your friend”

The family will have a private memorial service. In lieu of flowers, donations may be made to the charity of your choice.