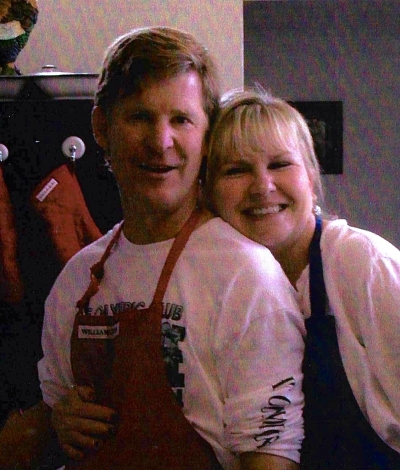 Faith Terry Witte passed away Jan. 15, 2018, after a brief and valiant struggle to overcome the complications of a stroke. Faith died peacefully in the loving embrace of her husband, children and sisters. Left behind to mourn her loss and celebrate her legacy are her husband, Steve Witte; children Keegan Witte (Camy) and Brittany Neal (Brent); sisters Celeste Johnson, and Colette Bettencourt (Mark); and grandchildren Carrigan (7), Kedrick (5), and Alika (2).

Faith Terry Heckler was born Oct. 10, 1957 in Camden, New Jersey. Her parents, Herb and Audrey Heckler, were ecstatic. Faith’s name had special significance to her parents, signifying the quality that sustained them through a family tragedy as they awaited her birth. The family moved to California in 1958. Faith grew up in the Greenmeadow community and attended Palo Alto schools, Ohlones Elementary, Wilbur Junior High and Cubberley and Gunn High Schools, graduating in 1975. A tomboy in her youth, Faith enjoyed playing football in the park with the neighborhood boys and excelled on the Greenmeadow swim team. She was a beloved babysitter for many neighborhood families, indicative of her lifelong work ethic and love of children.

Faith first met her future husband, Steve Witte, in kindergarten. They would cross paths all the way through elementary, middle and high school. For many years Steve was the only kid who could occasionally best Faith in a running race, though it’s possible she sometimes let him win. As a 14-year-old she regularly called Steve's house early Saturday mornings to secure a promise from Steve that he would swim at that day’s meet. Finally at age 17, Steve asked Faith out while walking her home from the Greenmeadow pool one evening — thus started a long and happy life together.

Faith and Steve were married on Dec. 15, 1979. They lived in a small cottage in Los Altos Hills, where they welcomed the births of their two children, Keegan Craig, on Feb. 28, 1983, and Brittany Aspen on Aug. 5, 1985. In 1988, the family moved to a wonderfully close-knit neighborhood in San Jose. Faith’s generous nature ensured that her neighborhood felt like an extended family. She soon established an annual Fourth of July celebration like the one she grew up with in Greenmeadow; now more than 20 years later, it continues with a parade, fire engines, antique cars, a watermelon eating contest and games.

Once Keegan and Brittany were grown, Faith and Steve returned to Faith’s childhood home in Greenmeadow, where they were beloved members of a vibrant neighborhood (and stalwart participants in the Fourth of July parade). Proximity afforded Faith precious time with her father and her mother, who lived with them for some time. Faith was grateful to be close to them both before they passed away within six month’s time. She also offered a caring home to an elderly neighbor from down the street. While their own kids were independent young adults, Faith and Steve never lacked for youngsters in and out of their welcoming household.

Faith’s 43-year career in banking encompassed nearly every position possible in the field. She started as a teller in the late 1970s and worked her way up, serving as Merchant Vault Manager at Bank of America, Manager of New Accounts at Eureka Bank, and a branch manager in several locations for both Citibank and Union Bank. She also held several investment licenses. Faith’s employees and clients profited from her depth of experience as well as the incredible people skills that complemented her professional expertise; Faith received numerous awards for excellence from the several institutions with which she was affiliated. Just as she was involved in her neighborhood, Faith was always involved in the community where she worked; she supported various organizations that provide direct support for local community members, such as Habitat for Humanity and The Boys and Girls Clubs. Faith herself sponsored a young family transitioning from a homeless shelter to an apartment, providing Christmas gifts while Keegan helped them with food.

Faith’s father, Herb, introduced the family to sailing early, and Faith took to it immediately. She had a lifelong love of flying across the water with the wind in her hair. With Herb, she raced Coronado 25s in the Bay. Faith was very competitive and they usually won. She bought a Daysailer when she was 17 and taught Steve to sail; he has been her first mate ever since. They loved to sail at Huntington Lake and returned regularly. Steve taught Faith to backpack, another pursuit they enjoyed for years — often for extended trips, often off-trail.

Faith’s professional skills were complemented by her remarkable artistic eye and design ability. She enjoyed interior and garden design, infallibly seeing the potential for beautiful transformation in any space. Countless friends and family members have benefited from Faith’s generous willingness to offer design advice. She also loved to create beautiful clothes and furnishings, and her garden was always lovely and prolific.

Nothing gave Faith greater joy than time spent with family, and her concept of family always embraced a large circle of friends. A devoted mother, aunt and grandmother, Faith had a gift for making children feel enveloped by her loving warmth. She radiated pride in her children and delight in her grandchildren. She will be deeply missed by so many whose lives she touched.

Photo Gallery
0 photos Upload a photo
Remembrances
2 entries Submit a remembrance
From Roben Voigt
Feb. 15, 2018
Cousin Faith was a remarkable woman who lit up a room wherever she went. Living on the east coast I didn't get to spend much time with her, but when I did it was memorable. Her beauty was much more than skin deep and I am very saddened by her demise....
Read more
Memorial service
A Gathering in Remembrance of Faith will be held at 2 p.m. on Feb. 18, 2018 at the Lucie Stern Community Center Ballroom, Palo Alto.
Make a donation
In lieu of flowers, please consider a charitable donation in Faith’s honor or a contribution to a legacy fund for the benefit of her grandchildren: https://www.gofundme.com/faithwitte
About this site     Contact us