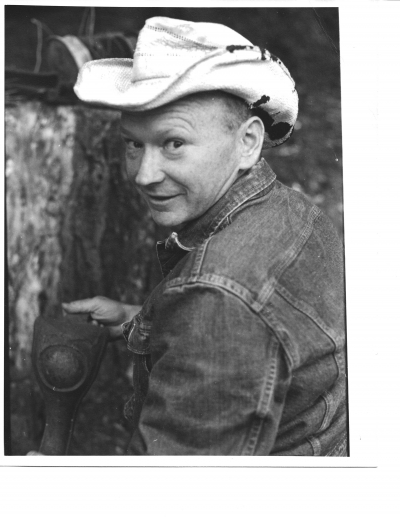 Although Ernie faced challenges as a Jewish German refuge, he managed to approach life with a positive outlook, enjoying the challenge of learning new languages and cultures. Ernie had a great appreciation for nature and spent much of his early adult life hiking, swimming, skiing and attending to his bountiful orchard and garden. Ernie took great pleasure in the time he spent at his beloved Kincaid Ranch in the eastern hills of San Jose, California. He was not one to shy away from hard physical work.

Immediately after arriving in the United States, he joined the army and due to a bout of measles was spared combat in Europe, but joined in the occupation of the Philippines and Okinawa. He competed in swimming at the 1946 Army Pacific Olympics in Tokyo.

After graduating with a degree in engineering from the Stevens Institute of Technology in Hoboken, NJ, Ernie snared a grant to support a bicycle excursion around Belgium and the Netherlands ostensibly to confirm his theory that Hoboken might have been named after a town in Flanders.

Ernie worked as an engineer for Foster Wheeler, and later Bechtel Corporation in San Francisco, specializing in large-scale cooling systems. Before his early retirement, he worked on the design of nuclear power stations on the West Coast.

Ernie cared deeply for the environment and spearheaded many early campaigns on nuclear waste. He entered this "second career" at a pivotal point in the environmental activism movement. If you met Ernie during this time, you were probably struck by his endless curiosity and inquisitive nature. If you struggled alongside him, you were family too. He embraced the opportunity to organize several initiatives to help secure a healthier and safer world for future generations. Notable among these were:

A successful campaign to stop the Mobil Oil Company from building on 2,600 acres of wetlands at Bair Island, Redwood City, in San Francisco Bay. A grassroots referendum was initiated by those opposed to this development. This acreage is now part of the San Francisco Bay National Wildlife Refuge system.

Participation in a 1983 delegation, led by Scott Kennedy under the auspices of the Fellowship of Reconciliation, to Israel, Jordan, and the occupied Palestinian Territories, which dramatically altered his perception of Zionism, a movement which his family had actively supported for almost a century.

There was a proposal to build a municipal Waste to Energy plant along the San Francisco Bay. The incineration of this waste would have released harmful materials into the environment. A small group was able to organize local citizens in San Mateo and San Francisco to stop this plant. When he learned that United Technology was burning missile fuel near San Jose, polluting the air and ground water with dioxins, a small group organized to shut down this operation.

In the early 1990’s a nuclear waste dump was planned for the desert in Southern California at Ward Valley in the Mohave dessert. The struggle to stop this waste dump lasted ten years, ending in a victory in 1999. By the end of the struggle hundreds of activists were involved. No new nuclear waste dumps have been built since then.

In 1998 Ernie and Dr. Howard Wilshire traveled to Stockholm and presented a paper on radioactive waste disposal at the International Symposium on Radioactive Waste.

In 1999 he was in Seattle to participate in one of the largest civil protest gatherings in recent US history to protest the convening of the World Trade organization (WTO). It was an inspiration to see Labor and Environmentalists together (Teamsters and Turtles united at last!).

In 2002 he drove across the US to protest at the School of the Americas in Ft. Benning, Georgia. It is the military base where the soldiers and officers from Central and South America are trained in torture and repression.

In 2003 he traveled to Cancun to help shut down another WTO conference. Delegates from less developed countries, encouraged by the large number of protesters from many countries, refused to accept the WTO rules on international trade.

In 2005 he had the exceptional experience of traveling with Venezuelan President Hugo Chavez in his plane to witness land redistribution in the Gran Sabana (savannah), as well as observing the farming co-ops in the province of Lara, which he felt were reminiscent of the early kibbutzim.

Ernie was grateful until the end of his life. Notably his last words were “Thank You.”