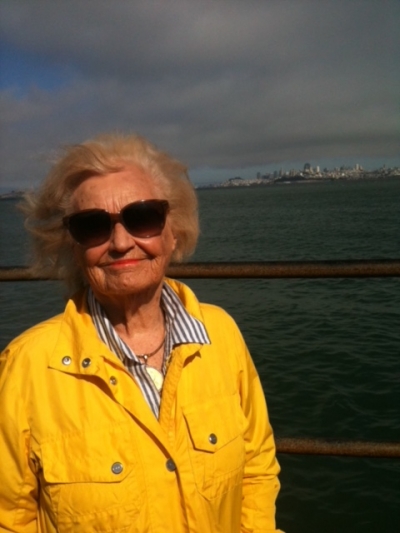 It is with great sadness that Elizabeth Jessen’s family announces her passing on June 10, 2018. She died peacefully at her home in San Rafael, where she lived for 68 years, with her family by her side. She was 97 years old.

Elizabeth Todd was born in Ukiah, CA and moved to San Francisco soon after her birth. She was the second of four children born to Anna Kristina Johannesson and Norman Graham Todd. She attended Polytechnic High School in San Francisco and later worked as a dental assistant in San Francisco before her marriage. In 1950, she moved to San Rafael with her husband and raised their three children. Volunteering in her community was a big part of her legacy. She served on the PTA when her children were young and was a founder of Pixie Park in Ross, CA. She was also involved with the Sunny Hills Auxiliary and worked at the Bargain Box, a charity thrift store, in San Rafael. She was known for her impeccable style and loved traveling, entertaining, decorating, fashion and flowers. However, her greatest passion was her family. Her children and grandchildren were the center of her world. Family gatherings and celebrations, which she continued to host well into her 90s, were her most favorite pastime. Liz will be greatly missed. She is survived by her children: Gary Jessen (Maria Collins) of San Rafael; Celeste McDonnell (Dennis) of Atherton; and Claudia Mostofizadeh (Hoshang) of Novato; as well as seven grandchildren, six great grandchildren; and her younger sister, Edith Baldwin, of Los Gatos.

Photo Gallery
0 photos Upload a photo
Remembrances
0 entries Submit a remembrance
Memorial service
A Celebration of Life Memorial will be held on Saturday, July 21, at 3pm at Sharon Heights Golf and Country Club. For more information, please visit HonoringLiz.org.
Make a donation
In lieu of flowers, the family requests that you donate in Liz’s honor to TESS Research Foundation, an organization that was close to her heart. To donate, go to tessresearch.org or mail to 655 Oak Grove #53, Menlo Park, CA 94026.
About this site     Contact us