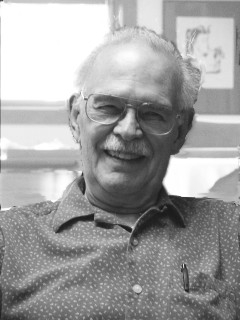 Edwin M. (Ted) Good passed away from multiple causes on Sept. 12, 2014. Born April 23, 1928, in French Cameroun, Africa. Dr. Good was a professor of religious studies at Stanford University (1956-91), a Hebrew scholar, and a piano historian. He published six books and many articles on these subjects. He was also a fine pianist and enjoyed performing chamber music.

After retirement in 1991, he moved to Washington, D.C., where he was involved in the Smithsonian Institution's "Piano 300" commemoration of the anniversary of the invention of the piano, both as co-curator and through commissioning a replica of one of the original instruments built by the inventor. Dr. Good frequently performed on this instrument during the last years of his life. Also during retirement he completed a 10-year project transcribing the personal diaries of William Steinway, one of the Steinway brothers who brought the piano company to the U.S. in the 19th century.

Ted Good earned a Ph.D. in Religion at Columbia University, a M.Div. from Union Theological Seminary in New York, a B.A. in Music from Westminster College, Pennsylvania, and a M.A. in Music from Stanford University. During his years teaching at Stanford University he incorporated into his teaching and writing a literary approach to the Hebrew Bible, and this continued with his two post-retirement books, a translation and commentary on the first 11 books of Genesis, "Genesis 1-11 Tales of the Earliest World" (Stanford Press 2011), and the forthcoming translation and commentary "Song of Songs, Codes of Love" (Wipf and Stock, 2015.)

Photo Gallery
0 photos Upload a photo
Remembrances
1 entry Submit a remembrance
From Wilford
April 30, 2018
I'm still not sure what you mean by this title and I think that we need to make something out of it. It needs to be on best resume writing services and I think that we can think about it other way...
Read more
Video
Upload a video