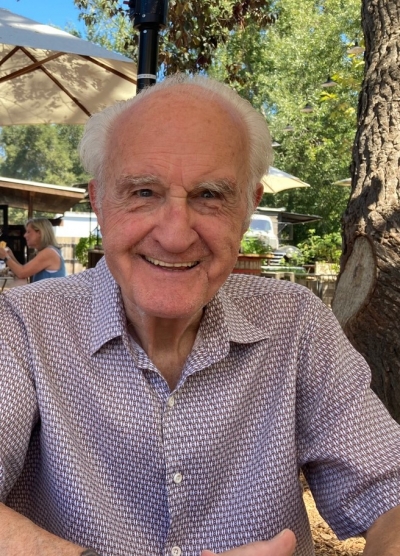 He would like everyone to know the transaction was smooth and fast, and that this permanent relocation reunites him with loved ones he has missed dearly. He is particularly happy to see his mother and father, Ruth and Clarence, brother William, and many cherished friends.

While there were no streets, buildings, or monuments named in his honor, many real estate folks in Menlo Park consider him a man worth celebrating. To his only child, daughter Brandie, he was a hero. Her daddy hung the moon and the stars and set a high standard for integrity, character, and values.

Don was proud of his working-class upbringing in San Francisco, where his father owned a barbershop in the Mission and his mother worked as a hairdresser. He grew up with a horse named Jerry and spent many a day riding around not yet developed Diamond Heights. He also had a dog named Jerry, and never could explain how the two animals came to share the same name. He maintained a deep love for the City, referring to it as “my beautiful city of St. Francis.”

At 18, Don enlisted in the Navy which began three lifelong passions: sailing, Hawaii, and travel. He was stationed on the USS Tombigbee, a gasoline tanker deployed to the MidPac operating area during the Korean War. (Trivia: “Tombigbee" comes from Choctaw and means “coffin-maker.”) The Tombigbee was part of the fuel supply network for aircraft and other support vehicles on Bikini, Eniwetok, & Kwajalein atoll during the AEC Nuclear weapons tests. Don was awarded a bravery medal for being on the fuel tanker while under enemy fire, but that was not a tale Don would retell. The Tombigbee and each port of call were Don’s playground and the setting for stories that would delight and entertain for the next 65+ years. (Did you hear the one about driving a forklift off a pier?)

After his stint in the Navy, Don returned home to San Francisco with five tattoos and a zest for life. He and two buddies moved into a West Portal bachelor pad and somehow managed to get a pet monkey, George, “to charm the ladies.” One day George ran away, but no search was conducted. As it turned out, George’s propensity to toss his poop around the house was counterintuitive to the lady-charming strategy.

Fast forward to Don’s start in Menlo Park real estate when Ray Spinelli offered to mentor him. For perspective on late 60’s real estate, it took Don nearly an entire year to earn his Million Dollar Club briefcase, the coveted prize for $1,000,000 in transactions over twelve months. He carried that briefcase with pride. He went on to earn his Broker’s license, which he maintained until October of this year. Don later joined forces with Bill Weseloh to start their boutique brokerage, Weseloh & Young. Don remained at the brokerage until he accepted an offer to manage the local Grub & Ellis office, which then went through several acquisitions during those early days of real estate brand consolidation. No matter the logo on the building, Don’s True North was to maintain the integrity of the business, and the success of the agents. He would not waver on either.

Don loved the real estate “biz” and the difference it could make in a person’s life. He was too humble to admit that he enhanced many lives throughout his career. This includes the clients who built wealth through property ownership and the agents he mentored and supported. He cherished the many dear friends and relationships cultivated throughout his career.

Don retired from real estate after nearly 40 years and promptly moved to Hawaii to live on a sailboat aptly named “The Six Percent.” His first night on the boat he called Brandie to describe the gorgeous sunset he was watching “This is what it’s all about, Kid. This is what I’ve worked for all these years.” He, and the boat, moved back to California after a few years. Admittedly, he missed everyone too much to live so far away.

Real estate gave Don the means to travel, and he relished his time away from the phone. He enjoyed Greece, Italy, Mexico, and of course Hawaii, but his love of sailing made the Caribbean a favorite. Don and friends enjoyed several excursions on Windjammer Barefoot Cruises, a fleet of tall ships that took small groups out to sail the Grenadines, British Virgin Islands, and the Bahamas. Don couldn’t get enough of sailing.

Above all, Don was a fiercely devoted father, raising his daughter as a single parent - unheard of in that era. His first priority was to make certain Brandie had a happy, magical childhood, and that she did. Her heart is full of beautiful, bittersweet memories; watching her Dad climb up onto the roof to leave carrots and water for Santa’s reindeer, discovering the Easter Bunny’s footprints next to the basket left on the front porch, and believing he arranged the July 4 fireworks for her birthday of the same day. To celebrate her birthday in later years, Don would phone Brandie first thing in the morning, sing to her his own zippy rendition of “Happy Birthday” and then wish her a Happy Anniversary for it was “the anniversary of the day we first met.” In a goodbye note left for Brandie: “You were the epicenter of my life, and I loved you a whole bunch, Kid … God how I loved to brag about you.”

Don’s beloved son-in-law Mike (or as Don called him, “Chefy”) will help Brandie carry on his spirit, but alas Don took his wit and endless tales of shenanigans with him. He told stories with a twinkle in his eyes that led one to believe he was telling only half the tale.

“I had a great life and not many things come to mind that I would change.” While Don lived a longer than average life, his life could never be described as average. He lived by his own rules and on his terms, going as far as to leave an instruction manual for his death known as “the Death Manual.”

The three-ring, section-tabbed binder contained the goodbye note referenced above, financial and account information, and detailed step by step instructions for Brandie to follow when the time came. For decades Brandie refused to acknowledge the binder’s existence, appalled her beloved father could so easily publish post-demise activities. Now she sees it for what it is – a selfless gift from a selfless, generous man that always wanted to make everything easier for those he loved.

Don’s ashes will be scattered in strict compliance with Death Manual instructions. Said instructions include the boat & captain, moon cycle, tide, month to scatter, location of scattering, and “guest list.”

However, Brandie & Mike will defy Death Manual protocol and throw a Don-worthy celebration of life that will (naturally) feature bourbon and tall tales. The date of the celebration is TBD.

Rest in peace, you wonderful, delightful man. You were loved. They broke the mold when they made you. There will never be another man that will hold a candle to Donald Orville Young.

Instead of tears, please donate to The Humane Society, or simply do a nice thing for someone that needs some help.

"It is the secret of the world that all things subsist and do not die but only retire a little from sight and afterward return again. Nothing is dead; men feign themselves dead, endure mock funerals, and there, across the room, they stand looking out a window, sound and well, in some strange disguise." - Ralph Waldo Emerson 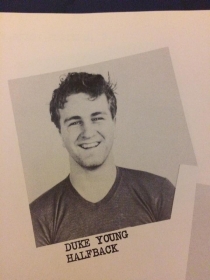 Remembrances
3 entries Submit a remembrance
From Anna Louise Gerac
Dec. 15, 2020
It was 1977 when Don Young encourgaged me to purchase my first home in Menlo Park, CA. Don was there every step of the way to guide me and to support this decision. When we were not discussing the trials and tribulations of being a homeowner, we wer...
Read more
Make a donation
The Humane Society
About this site     Contact us