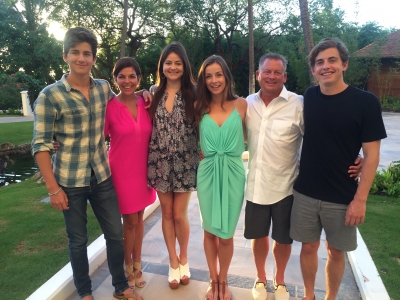 Donald Alexander Lucas was born May 24, 1962, in Stanford, California to Lygia and Donald Leo Lucas. He grew up with his sisters Nancy and Allie in Atherton, and would later raise his family there with his wife Sarah. He attended St. Joseph’s School, Charles Armstrong and Bellarmine. He received his B.A. from Santa Clara in 1984 and embarked on his 35-year career in venture capital.

He was a lifetime member at the Menlo Circus Club where he enjoyed summers poolside flipping burgers, and playing tennis under the direction of tennis pro and mentor Don Prince. Don met the love of his life, Sarah, over spring break in 1986, at the Vintage Club in Indian Wells where he enjoyed golf and community as a junior member. They married in 1988 and began their lives together in the community Don loved. They named their first daughter Mary Alessandra after Don’s grandmother Mary “Gogo” Lucas, the most pivotal person in his young life. His grandmother instilled in him a love of God and gardening, good food and spirits, and family and friends. Jack Bixby soon joined his sister and they enjoyed being a young family of four for several years, spending time in Jackson Hole at the family RRR ranch, and in Hawaii. Kate Alexandra joined them in 1998 and finally the crystal dragon Henry McGregor, born in 2000.

Don loved his children fiercely and was so proud to raise them as second-generation members of the community, attending Trinity, Sacred Heart and Menlo Schools, swimming for the team at the Menlo Circus Club, enjoying family dinners on Sundays, where friends and family were always gathered on the porch at Amador Farms. He was the unofficial “mayor of Draeger’s”, parking his car in the loading area and popping in through the back door to greet the team by name. He often could be found washing his car, hiking the Dish, lunching in the booth at Evvia or popping into the Palantir buildings to grab an update and a new company t-shirt. He was known for his landscape advice, oftentimes unsolicited, and his love of his outdoor shower, stocked with amazing products. He was proud to share his love of gardening with anyone who would come for a tour and was especially fond of teaching the proper technique for cutting roses.

Don was a proud second-generation venture capitalist, and deeply respected the pioneers of Silicon Valley. He joined his father at 3000 Sand Hill Road in 1984, and then founded RWI Group in 1993 and Lucas Venture Group in 2007. He believed in using venture capital to make the world better. He invested in companies such as Oracle, Cadence, Palantir, Avinger, MightyNetworks, Berkeley Lights, Bossa Nova Robotics, Katerra, Pallet Shelter, and Finicast. He believed in the power of a handshake, in supporting his entrepreneurs with any resources needed, and loved representing his companies by sporting their logo wear.

Fueled by his daughter Mary’s diagnosis of Type 1 diabetes in 1998, Don was most proud of his role as a founding investor in Dexcom, the continuous glucose monitor that helps millions today. He was most thrilled when he would see someone wearing a Dexcom in public and would talk with them about the company and the road to commercialization. The Lucas Family quickly jumped into raising awareness and funds for research. They hosted “Spring Fling” in Half Moon Bay for 12 years, a two day social and golf event benefitting JDRF, an annual beloved event for so many. He then welcomed Beyond Type 1, which Sarah co-founded in 2014, into his office and was proud to help the company grow into one that serves millions impacted by diabetes.

Don was dedicated to his Catholic faith and adored his community at church. He and Sarah attended Our Lady of the Wayside when they were first dating and when it closed in the 1988 earthquake attended Nativity Church. When their children were born they attended St. Denis Church, taking up the front pew, and he dedicated the gardens there to his grandmother, Gogo. With the move to Portola Valley, Don once again enjoyed being a part of Our Lady of the Wayside community, sitting in pew 23. He most recently enhanced the grounds there, firm in his belief that a top coat of mulch could make any garden better.

Don was a morning person, who rarely made it past 9pm. He believed in the mantra, “Leave them wanting more,” and he certainly did just that. On Monday, January 28th, under the sliver of a beautiful moon, Don passed peacefully from this world. He was surrounded by music, tears, flowers, prayers, laughter, family, friends, his beloved puppy, Mackey, and of course, cashmere. The care he received from every member of the Sequoia hospital team was extraordinary and the love, friendship, prayers and support from his community is unparalleled. He always did leave a party too soon, but we know he surrounds us now…forever engrained in the community, a part of the earth, sky, water, and air he loved. As Helen Keller said, "What we once enjoyed and deeply loved we can never lose, For all that we love deeply becomes a part of us.” We love you, Don. Godspeed.

If you would like to make a gift in memory of Don we have selected three things that he was most passionate about: God, gardening + Type 1 diabetes. To support the gardens and beautification of his church, please send a check to Our Lady of the Wayside Church (930 Portola Road, Portola Valley, California 94028) and note in the memo Donald A Lucas fund. To support Beyond Type 1 please visit www.beyondtype1.org or send your gift to 1001 Laurel Street, Suite B, San Carlos, California 94070.

Photo Gallery
0 photos Upload a photo
Remembrances
4 entries Submit a remembrance
From Shayla Payne
Feb. 19, 2020
I have been cutting Don's hair since February 2014. Even though I knew him only 6 years he had become like an Uncle or a big brother to me. We shared about our lives. Laughed together! even cried together. I saw him grow more and more spiritually. He...
Read more
Make a donation
If you would like to make a gift in memory of Don we have selected three things that he was most passionate about: God, gardening + Type 1 diabetes. To support the gardens and beautification of his church, please send a check to Our Lady of the Wayside Church (930 Portola Road, Portola Valley, California 94028) and note in the memo Donald A Lucas fund. To support Beyond Type 1 please visit www.beyondtype1.org or send your gift to 1001 Laurel Street, Suite B, San Carlos, California 94070.
About this site     Contact us