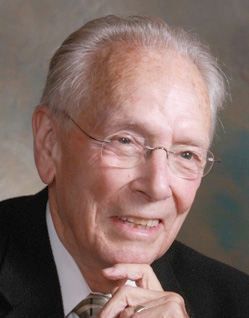 Davis Walsh Baldwin was born in Winnetka, Illinois, on July 10, 1927, to Margaret “Sis” Couffer Baldwin and John Richard Walsh Baldwin. Davis gently passed away with family by his side on November 22, 2016, while gathered for one of his favorite family traditions; celebrating the Thanksgiving holiday in Lake Tahoe. Davis spent a happy childhood participating in sports and school activities, delivering Saturday Evening Posts, performing as a choirboy at Christ Church, working as a camp counselor on the Great Lakes, visiting his Great Aunt Ama’s home in Bennington, Vermont, and fully enjoying life with his loving and characterful parents and younger brother Peter. He graduated from New Trier High School in 1945.

Later that Fall in Chicago’s Union Station, he boarded a train to Stanford University where he pledged Phi Delta Theta, earned spending money creatively dressing store-front windows along University Avenue and studied to be accepted into medical school. Upon graduation from Stanford University in 1949, he earned a seat at Northwestern University’s Medical School where he graduated in 1953.

His internship followed at Passavant Memorial Hospital in Chicago where with good fortune he was mentored by renowned physicians, Dr. Loyal Davis for General Surgery, Dr. Stuart Abel for Gynecology and Dr. John Brewer for Obstetrics. Davis earned a fellowship and a special preceptorship with Dr. Brewer; a mentor he held in great esteem and affection. He enjoyed his fond memories of Dr. Brewer rigorously testing and tutoring his young residents on grand rounds, challenging them to doubt everything, even his advice and instilling in Davis a lifelong devotion to putting the needs of his patients first. During the Korean War, Davis served as a Captain in the United States Air Force in Ann Arbor, Michigan. His residency in Obstetrics and Gynecology at the Palo Alto-Stanford University Hospital followed. Though honored to be recruited by Northwestern Medical School to become a valuable part of their academic faculty, he knew his heart was that of a private practice physician. In 1959 he opened his Obstetrics and Gynecology practice at 703 Welch Road, Palo Alto. Davis was the director of the Stanford Hospital Gynecologic Pathology Lab and thoroughly enjoyed teaching and the opportunity to mentor medical students and residents as an Adjunct Clinical Associate Professor at Stanford Hospital over many decades. He was an active member of various medical societies and peer review groups. In 2011, he was deeply touched to be given a Lifetime Honorary Medical Staff appointment by Stanford Hospital and Clinics.

Davis was highly regarded by the legal community. He was a founding member and several times the Chair of the Medical Review and Advisory Committee of the Santa Clara Medical Society. He was often asked to review medical cases and testify in the courtroom. The lawyers who hired Davis not only trusted his ability to break down and explain complex medical cases to lawyers, jurors and judges alike using his pleasant, relatable style, but also because Davis was so respected and accomplished in his medical specialty. Always a logic based physician, Davis pushed the envelope on many fronts, for the benefit of his patients. Davis did not believe that “once a cesarean always a cesarean.” He safely delivered breech positioned babies and promoted the practice of natural birth following cesarean section. A trusted, compassionate physician, he saw each patient and each pregnancy as unique. His patients’ pain and joy became a part of him, and he was humbled and touched by the love and faith so many gave back to him in return. In 1975, a new and important phase of his practice began with the inclusion of a nurse practitioner, Patricia Hobbs O’Malley. His practice would be among the first in the community to provide such a service. Delight and happiness came to them in 1976 when they also became husband and wife! They felt strongly about empowering a woman in her birth experience and helped to pioneer the use of family birth rooms. Davis encouraged a mother to hold on to her baby as she delivered and he took great pleasure in placing the newborn baby atop the mom’s tummy. Davis and Patricia believed wholeheartedly in birth as a family experience and included their children at the births of their younger siblings, extending this vision to their patients as well.

Over the forty years of their practice Davis and Patricia enjoyed providing highly personalized care with a shared commitment to enhancing the health of women. Together they expanded the services they offered to their patients, including group childbirth classes, weekly mother-baby support groups, and later menopausal care, in office mammography, bone densitometry, women’s clinical research and integrative functional medicine.

Davis was a loving, fun, proud champion of his six children, four grandchildren and one great-grandchild. Believing in the gifts of procreation, his youngest child is 33 years old, his eldest is 65 years old. In that span of time as a father, he gleefully managed to rarely miss a sports or significant event in his children’s lives despite the ongoing necessity to be available to his patients around the clock. To them, their father had a knowledge base that was infinite and inspiring. He made curiosity, self-reliance, humor and compassion constant companions they can turn to forever. Davis is survived by his adored wife Patricia H. Baldwin, of San Francisco; son L. Blake Baldwin of Kennebunk, Maine, daughters, Lucy K. Baldwin of Palo Alto, Laurie A. Baldwin (Mark Mickelson) of Palo Alto, Bridget O’Malley Baldwin (Matthew A. Nathanson) of San Francisco, son Christopher H. Baldwin (Heather) of San Francisco, daughter Blythe B. Baldwin of Oakland; grandchildren Bretney W. Johnson (Meggan) , Prentiss W. Johnson (Nigel Mesta), Willa A. Nathanson, Sierra Baldwin, and great grandson Xander W. Johnson; brother Peter D. Baldwin (Terry) of Pebble Beach, 3 nieces and nephews and 5 grand nieces and nephews.

Photo Gallery
0 photos Upload a photo
Remembrances
6 entries Submit a remembrance
From Carol Ann (Bennett) Wilshusen
Jan. 1, 2017
Dave delivered both my sons, 1969 & 1973. We would always have a cup of coffee in his office & chat away. Not only was he a compassionate OB/GYN, he was a brilliant Physician, one who thought out of the box, in general medicine as well., H...
Read more
Memorial service
A memorial service for Davis will be held at Stanford Memorial Church on Tuesday, Dec. 20 at 2:00 p.m. A gathering for family and friends will be held at the Menlo Circus Club following the service to celebrate his life.
Make a donation
In lieu of flowers, please consider a donation to the charity of your choice.
About this site     Contact us