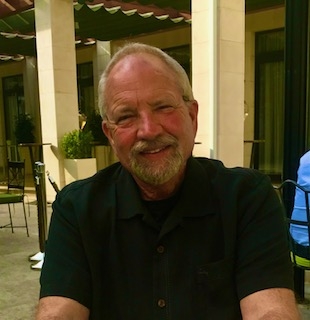 David Gary Cole passed away peacefully on May 6, 2021 in Mountain View, California.

David was born in Grand Rapids, Michigan on May 14, 1948 and his family moved to Santa Clara, California when he was 5 years old. He attended Wilcox High School and graduated from San Jose State University with a degree in English Literature. While on track to obtain his teaching credential, David took ownership of Sterling Custom Upholstery, which he ran continuously and successfully for 50 years. He will be sorely missed by the Sterling family and extensive customer base throughout Silicon Valley.

David was an avid storyteller and known jokester, entertaining his fellow Rotarians at the Mountain View Rotary Club where he was active for nearly 40 years. He selflessly volunteered in his spare time for a variety of community causes and never met a stranger he couldn’t have a chat with. David thrived on spinning hilarious, yet potentially inappropriate, yarns to whoever would lend an ear. His “Sunday Funnies” social media posts were quite the hit, building up a devoted following among family and friends. He was a larger-than-life character and cherished time spent with a cocktail in hand, golfing, and traveling the world with his lovely wife by his side. David is survived by his wife of 33 years, Cindy Goldmann Cole, as well as three children: Garrett Cole, Jennifer Akers, Jamie Cole; five grandchildren: Kayden, Fiona, Taylor, Justin, and Cooper; and one great granddaughter, Kennedy. He was preceded in death by his son James Cole in 2011, as well as his parents and two brothers Richard and Michael. He also leaves behind his brother Patrick Cole, plus numerous nieces and nephews.

Photo Gallery
0 photos Upload a photo
Remembrances
0 entries Submit a remembrance
Memorial service
David's Celebration of Life will be held Saturday, May 22nd at 11:00 a.m. at Spangler Mortuary, 174 North Sunnyvale Ave., Sunnyvale, CA.
Make a donation
In lieu of flowers the family suggests donations to the Mountain View Rotary Club. Donations may be made by check, credit card or Paypal. Please make checks payable to: "Rotary Club of Mountain View LEF" and mail to the following address: Rotary Club of Mountain View, PO Box 390280, Mountain View, CA 94039. To donate via Paypal or credit card, please visit the following link: https://www.paypal.com/donate?hosted_button_id=6JV2P2MFD8BFA
About this site     Contact us