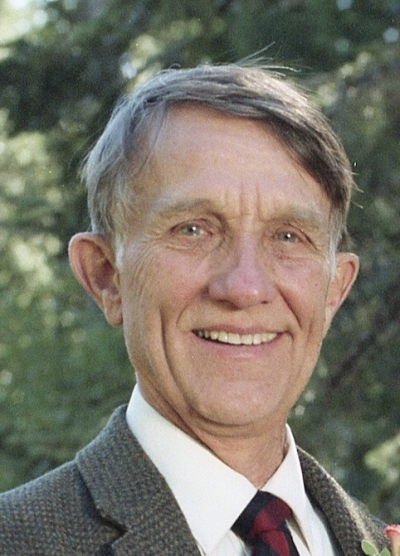 David “Dave” C. Fork, beloved husband, father, brother, uncle, grandfather, and friend, passed away at his home in Woodside at the age of 91.

Born in Michigan in 1929, David moved with his parents, Charles and Emma, and sister, Kathrine, to California in the mid-1930s where they settled in Brentwood, a suburb of Los Angeles. During the summers, Dave and Kathy enjoyed the annual road trips to Ohio where they visited relatives on the family farm and went for rides in their cousins’ airplanes. When Dave was a teenager, the family moved to San Diego, where he developed an interest in natural history and biology. He spent his days volunteering at the San Diego Natural History Museum where he met E. Yale Dawson, a prominent botanist and phycologist, who became his mentor and helped him chart a course for a career in science. Dave attended various expeditions organized by Dawson, collecting plant specimens in the jungles in Mexico, in the Mojave Desert, and from tidepools along the California coast. On one of these trips, he made the discovery of a new alga, which was later named after him (Binghamia forkii). Dave graduated from San Diego High School in 1947 and then enrolled at UCLA. He later transferred to UC Berkeley, where he received a B.S. degree.

After a stint of several years in Japan serving as an Officer of the Navy during the Korean War, Dave returned to California and began work on a doctoral degree at UC Berkeley. While at Cal, he met the love of his life—Jody, a woman who shared his love of hiking, climbing, and the outdoors. They married in 1958.

In 1961, Dave received a PhD in Botany from UC Berkeley. The couple then moved to La Jolla where Dave did post-doctoral work at Scripps Institution of Oceanography, while Jody worked at Scripps Clinic and Research Foundation. They lived in a beach house overlooking the ocean, and from that point on, they always aimed to live in peaceful, natural settings. The couple spent the next several years in Europe, where Dave had post-doctoral fellowships at universities in Germany, France, and the Netherlands.

In the mid-1960s, Charles Stacy French, a well-known figure in the field of photosynthesis research, hired Dave as a staff biologist at the Carnegie Institution for Science, a position which he held until retirement some thirty years later. Throughout his long and successful career, Dave conducted research on the mechanisms of photosynthesis in plants. In the 1980s, Dave took a sabbatical to collaborate with colleagues at the National Institute for Basic Biology in Japan and the University of Sydney in Australia. As a member of an international community of plant physiologists, Dave enjoyed many decades-long collaborations and friendships with colleagues from around the world.

In 1963, Dave and Jody settled in a home in the oak-studded hills of Portola Valley. There, they raised three daughters—Laurie, Patty, and Susie. In 1974, the couple built a house among the redwoods in the hills of Woodside, where they enjoyed living for the next four decades. Over the years, Dave and Jody shared their mutual love of the outdoors with their daughters, taking them on many adventures—camping and backpacking in the Sierra Nevada, canyoneering in Utah, exploring Idaho, Hawaii, and Australia with sister Kathy and brother-in-law Tom, and traveling in Europe, Asia, and the Pacific. In the 1980s, the family accompanied Dave on his sabbatical to Australia and Japan, where they shared an unforgettable eighteen months of adventure. In Sydney, they lived in a beach house with spectacular views of the Tasman Sea, learned how to scuba dive, and traveled throughout the country. When Dave went to a remote island in the Great Barrier Reef to conduct research, Jody and his daughters happily volunteered as to serve as research assistants, spending their days collecting specimens from the turquoise lagoons. While living in Okazaki, Dave took his family to the coastal town of Gamagori, where he had visited during the war and had planned to return someday with his future bride. Always the inveterate botanist, Dave imparted his knowledge of flora and natural history to his daughters wherever they went.

Dave was a passionate mountaineer, hiker, and above all, a backpacker. He took his first “knapsack” trip in the Sierra Nevada in the late 1940s and after that was hooked for life. He returned to the mountains every summer with friends and family for rejuvenation and inspiration until he was 83. During the 1950s, Dave climbed many of the well-known spots in Yosemite Valley, as well as the country’s highest peaks located in the southern Sierra. Over the course of his life, Dave had the pleasure of climbing Australia’s Ayers Rock (Uluru) once, California’s Mount Whitney twice, and Japan’s Mt. Fuji three times—and always reminded us about the Japanese proverb, "A wise man climbs Fuji once. Only a fool climbs it twice."

Dave is remembered with deep affection as a loving husband to Jody for 56 years, a devoted father, a fun-loving brother, and a sweet grandfather, who would happily get down on the floor to play with his grandkids. Friends describe him as “the salt of the earth” and “a true gentleman.” With a playful sense of humor and indefatigable energy, he built his life around the things he loved most – his family, the outdoors, and beauty in art, music, and nature. One friend remarked, “I learned a tremendous amount from Dave—about empathy, kindness, and how to live a rich and wonderful life. He really inspired me and gave me a sense of how to build a family on a foundation of gentleness and compassion.” Dave’s sister, Kathy said, “He was my ‘annoying’ little brother who meant the world to me. A brilliant mind and a great sense of humor.” His three daughters said, “He gave us the ultimate gift—a lifetime of his love and affection; he was always there for us—and because of this, he will live forever in our hearts.”

Photo Gallery
0 photos Upload a photo
Remembrances
0 entries Submit a remembrance
Memorial service
The family is planning a small, private service to be held in the Fall of 2021.
Make a donation
The family prefers donations to Yosemite Conservancy (Yosemite.org) or the American Parkinson Disease Association (apdaparkinson.org).
About this site     Contact us