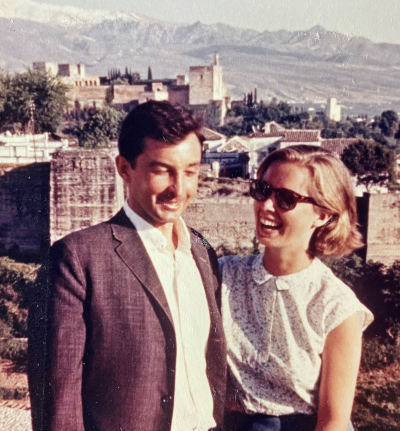 Constance “Connie” Euler Spencer, of Carmel, CA passed away peacefully on August 11, 2021, after 82 years of living by her personal mantra, “Don’t Postpone Joy.”

The daughter of Elva and Herbert Euler, and the sister of Susan Smith (Baxter), Connie was born on May 12, 1939, in York, PA and was a member of the first-ever graduating class of York Country Day School. She spent her summers on the shore in Cape May, NJ, a long-standing family tradition. After attending Wheaton College in Norton, MA and earning a degree in English (class of 1961), she worked in the buyer training program at Lord & Taylor before becoming a teacher at The Town School in New York City. It was during this time that she met Bob Spencer on a blind date; the two married on September 14, 1963, and settled in Menlo Park, CA where Connie embraced her new life on the West Coast.

In addition to being a loving wife and devoted mother of three children -- Sarah, Annie Cleveland, Bob (Amy) -- Connie poured her heart and soul into a life-long and faithful group of friends by organizing backyard water volleyball games, hosting lively dinner parties, instructing tablemates on how to do “The Laugh,” and planning the next “Stitch and Bitch” gathering. Along with knitting, antiquing, and cooking from The Harried Hostess Cookbook, Connie loved the 49ers, Giants and her family (in that order!).

Later in life, Connie and Bob moved to Carmel, where she adopted a rescue dog named Duffy, volunteered with the SPCA, and relished her new role of proud Grandy to Georgia Cleveland. Connie’s deep love of people, laughter, and life continued to shine brightly even in her final days.

We would like to recognize the dedicated nurses from Hospice of the Central Coast for their care and compassion during the last few years.