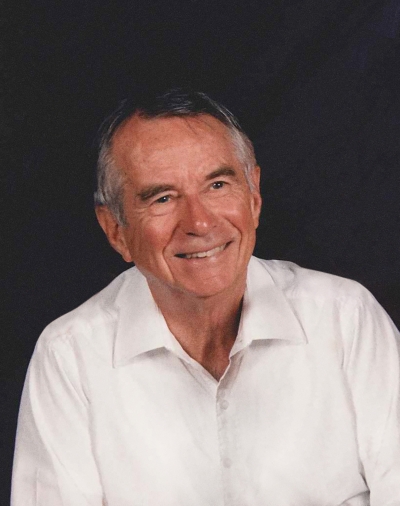 Charles Lawrence Swezey, a devoted father, grandfather, and great-grandfather passed away peacefully at the age of 96 on February 10, 2020 surrounded by family at Palo Alto Commons. He was preceded in death in 2013 by his wife of 69 years, Betty Ann Swezey.

Lawrence was a generous and humble man who lived with integrity. A member of the Greatest Generation, he grew up during the Great Depression and served in World War II and the Occupation and Reconstruction of Japan.

Born on October 5, 1923 to J. Marshall and Hazel Swezey in Goshen, NY Lawrence graduated from Goshen Central School in 1940. He was Goshen’s first Eagle Scout and attended the 5th World Scout Jamboree in 1937 in Holland (Netherlands). In high school he played football and managed the baseball team.

Lawrence attended Cornell University on a Regents Scholarship where he met his future wife Betty Ann Bischoff of Middletown, NY, at a Victrola dance. They were married in 1944. He was a member of the Theta Chi fraternity and ROTC, and lettered in lacrosse. He initially studied political science but graduated with a degree in economics when he realized he had the credits to graduate in three years. He was inducted into Phi Beta Kappa. Directly after college he attended Officers Training School in Fort Sill, OK.

Following his service in the U.S. Army, the couple moved to Palo Alto in 1946, where Lawrence attended Stanford Law School on the GI Bill. After graduating in 1948, he clerked for Justice Homer R. Spence on the California Supreme Court. He worked for a short period with the firm of Mitchell Silberberg & Knupp in Los Angeles. Lawrence served the California Workers’ Compensation Appeals Board (WCAB) in several capacities for 31 years, including 12 years as referee in charge of its San Jose office; four years as a Board staff referee, five years as its Secretary and Deputy Commissioner, and ten years as a Board commissioner in San Francisco having been appointed by both Governors Ronald Reagan and Jerry Brown, Jr. He was Senior Counsel at the State Compensation Insurance Fund, and for nearly 30 years he lectured for the California Continuing Education of the Bar, the University of California San Francisco, and the University of Southern California School of Medicine. He authored the seminal work on California workers’ compensation law – California Workers’ Compensation Practice – and continued to write case summaries and consult into his 90s. Lawrence was also Contributing Editor of the California Workers' Compensation Reporter from 1990 to 2013.

Among other service activities, Lawrence served as President of the Palo Alto Fair Play Council, a community group founded to reduce discrimination in the Palo Alto area.

Lawrence was passionate about cycling. He returned to Goshen over several years as a gold sponsor and participant in the Tour de Goshen charity bicycle ride and participated in the Paso Robles Great Western Bicycle Rally on Memorial Day Weekends. He was also a patron of the arts, enjoying traveling abroad and continuing education through Fine Arts Museums of San Francisco and Oxford University. He toured museums in the U.S. and around the world.

Lawrence lived in the family’s Palo Alto home on Fulton Street for 50 years where he raised his nine children. He was an avid reader and fan of the New York Times Crossword puzzle. Up until his passing, he attended Stanford football and basketball games religiously and enjoyed keeping score from his club seats at San Francisco Giants baseball games. He was a big fan and supporter of his grandchildren’s athletic and theater pursuits.

Photo Gallery
0 photos Upload a photo
Remembrances
0 entries Submit a remembrance
Memorial service
A celebration of life will be held at 2:00 p.m. on Saturday, June 20 at First Congregational Church of Palo Alto.
Make a donation
In lieu of flowers, gifts of remembrance can be made to the Fine Arts Museums of San Francisco.
About this site     Contact us