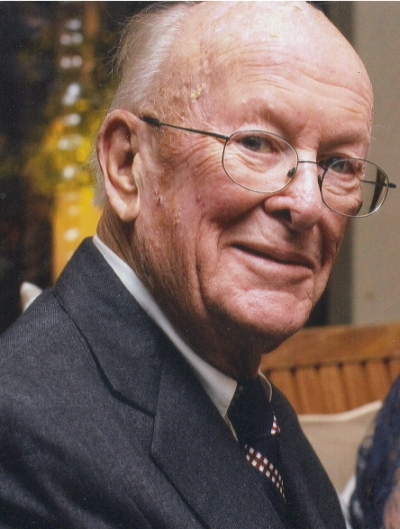 After almost 90 years of vibrant life, Dick passed away on February 10th surrounded by his family at Kaiser Hospital in Redwood City.

Born in Highland Park, Illinois, on February 25, 1923, he was the son of Elizabeth Lee and Irving Randall, Sr., who moved to Los Altos in 1929. His death was preceded by that of his two brothers, Irving and Lee.

He married Sally Ann Childs in Hood River, Oregon, in 1948 and they recently celebrated 64 years of marriage.

During his life, he lived in Charlottesville, VA, and Moorestown, NJ, designing large store interiors for Hussman Corporation. The Randalls have been residents of Atherton since 1964.

Dick was a quiet gentleman who was a true and committed friend to all who knew him. His sense of humor and generous spirit were reflected in his volunteer work throughout San Mateo County with the Boys and Girls Club and his pet therapy work for over a decade with two of his much loved Wheaten Terriers, Molly and Buckwheat.

A private celebration of his life will be held in early March.

Memorial contributions may be made to the American Diabetes Association or the Alzheimer?s Association.

Photo Gallery
0 photos Upload a photo
Remembrances
0 entries Submit a remembrance
Memorial service
A private celebration of his life will be held in early March.
Make a donation
Memorial contributions may be made to the American Diabetes Association or the Alzheimer?s Association.
About this site     Contact us