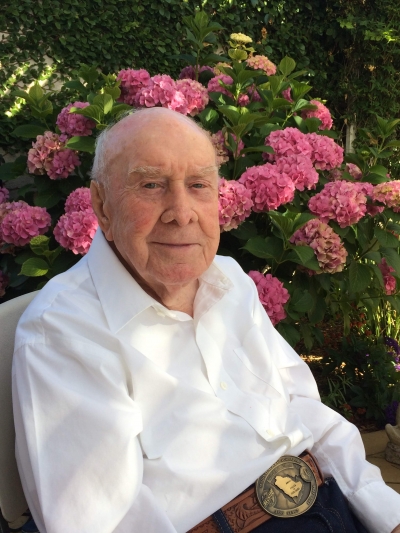 Charles A Everson passed away November 1 in Palo Alto, California. He had just turned 94 years old on October 11 and was celebrated by family and friends as a wonderful father, grandfather, friend, and patriot. Charles was raised in Shelley, Idaho, a place he always remembered fondly. At age 18, he joined the Army Air Corp (Air Force) during WWII and served from 1943 to 1946. He was ordered to the Pacific Theater and was sent to Okinawa. Following his active duty service, he remained in the Air Force Reserve until 1969, retiring as Major. Upon his return from the war, Charles, who usually went by “Chuck,” enrolled at Utah State University, graduating four years later with a degree in Landscape Architecture and Land Development. Seeking work opportunities, Chuck drove to Palo Alto, where he began his career as a landscaper, architect, general contractor, and city planner. His greatest professional opportunity came while working for three years in Saudi Arabia with the Bechtel Corporation, which was building a large industrial city there. In 1952 he met Betty Wolfe, who was working at the downtown Peninsula Creamery. Two years later they were married and began their life together in a home he designed in Portola Valley. They moved to Menlo Park in 1964. Betty passed away in January 2015. Chuck was a life-long member of The Church of Jesus Christ of Latter-day Saints and served the Church faithfully in many callings. Chuck and Betty have two daughters.