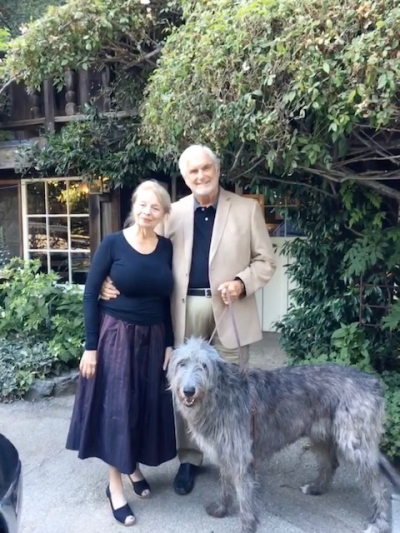 Born in March of 1940, Carol Hengst grew up in West Frankfurt, Illinois, something of a child prodigy in the arts – playing Beethoven and Bach startlingly well from a young age on her little upright piano and becoming the youngest person to submit a painting to the state art fair. The daughter of Albert and Adela Hengst, with two sisters Marilyn and Janice, she grew up in a Christian Science family and attended Principia College in Illinois. She studied Art and travelled in Europe. Most importantly, in their final days at Principia, she met Malcolm McFall, pretty much her opposite – an athletic, relaxed guy from a large Texan family. Malcolm knew after one date that he never wanted to be apart from her. He proposed at breakfast after that first date. From there ensued almost 60 years of an incredible partnership with love that overflowed and blessed us all.

The newlyweds moved to California to start life. Carol attended California College of Arts and Crafts for her master’s in art and began a painting career. She was one of the founding members of Gallery Nine in Los Altos, which continues to thrive today. She was also invited to exhibit and sell her work at the Vorpal Gallery in SF.

While raising her three children, Devon, Erin and Earl, she’d paint all morning in her converted garage studio with models coming and going – and then welcome the children home from school with a cup of tea and a cookie or homemade bread. What stands out about Carol was her ability to really listen – to make you feel like you were the most important person in the world. Having her ask about your day was a special moment.

She raised her children carefully and intentionally at Peninsula School and in the Christian Science church in Menlo Park. She refused to have a TV in the house and would only allow health food. She wanted her children to form their own opinions – not have the media or society tell them what or how to think. Although they didn’t offer sports for girls when she was in high school, she was a huge football and basketball fan. She also loved horses and encouraged riding for her daughter and son. She would gladly travel huge distances to cheer on her sons, daughter, and then grandchildren wherever they were competing or living. Her grandchildren returned her adoration by calling her regularly to discuss life, sports strategies, and new developments – or just to play her their latest guitar songs.

In the mid-Seventies, Malcolm and Carol boarded the QEII from NYC to Paris for a carefully planned three-month family trip to live in the south of France in a small town called Sete. This engendered a life-long love of all things French. Carol loved studying French and made many friends with whom she’d practice the language. She was an incredibly talented cook, loved traveling and was a voracious lifelong learner. Carol became a Christian Science practitioner after moving down to San Luis Obispo and had hundreds of patients around the globe. She was also a member of the Ministerial Association in San Luis Obispo for many years and served as President.

She graced us with her clear, inspired thinking, ability to really listen and speak her mind – and her ferocious love for Malcolm, her children, children-in-law - and all of her precious seven grandchildren. One of her favorite sayings from Mrs. Mary Baker Eddy was: “Stand porter at the door of thought.” She excelled at working constantly to maintain a pure and courageous mind. Hers was a powerful and unique mind which inspired us all – and which will continue to shine on through her many friends and family members.