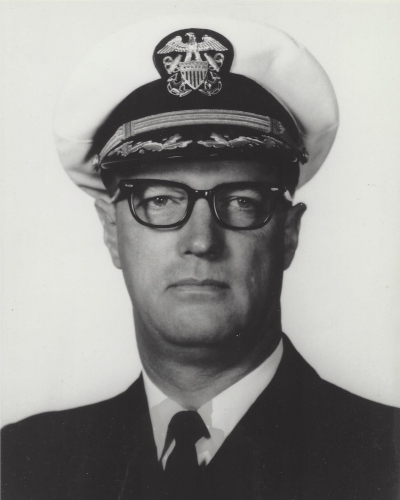 Carleton Crosby Hoffner, Jr. died in his home 2 days before his 89th birthday. He passed peacefully with his loving son and wife of 66 years by his side.

As the only child born to Rear Admiral Carleton C. Hoffner, Sr. and Josephine Huber Hoffner in Washington DC on April 23, 1931, Carl wanted to follow in his father’s footsteps by serving in the U.S.Navy. While growing up, Carl became active in the Washington Figuring Skating Club, competing nationally and internationally in pairs and ice dancing competition. Carl and his partner Ann (“Chickie”) Davies won the US National Championship in 1946 and in 1949 placed 3rd in the World Championships in Paris. He carefully maintained his amateur status in ice skating throughout his life, “just in case” he ever found the time to get back into skating.

In addition to the focus and many hours of training required to be a world class figure skater, Carl also worked several part time jobs, competed in tennis at the Army Navy Country Club, and graduated at the top of his high school class. His outstanding accomplishments netted him a presidential appointment to the United States Naval Academy where his father graduated in 1925. He spent 1 year attending the University of Virginia until he was old enough to enter the Naval Academy. While at the Academy he served as captain of the varsity tennis and squash teams. During a squash competition against Harvard in 1952 one of his teammates became ill. Carl went to check on his teammate at Mount Auburn Hospital in Cambridge. It was there that he met his future wife, Registered Nurse Mary Constance Read (Connie). Carl graduated from the Naval Academy on June 5, 1953 and married Connie the same day.

Immediately following graduation, Carl went to sea to serve in the Korean conflict followed by a world tour. Upon his return to Norfolk, Virginia, after more than a year of active duty, he reunited with his wife, and was introduced to his six-month-old daughter, Carol (1954, Chelsea, MA) for the first time. He served a full career in the U.S. Navy taking him all over the world. He and Connie found time to have two more children: Heidi (1956, West Point, NY) and Eric (1959, Guam). In 1960, the family moved to Hawaii, where Carl, as part of the Seabees (Naval Combat Construction Force), finished the construction of the Arizona Memorial. His father was on duty in Pearl Harbor on the morning of December 7, 1941 when the Arizona was sunk during the Japanese attack. Carl was proud of his work on this project bringing the family’s history in Pearl Harbor full circle.

After completing his active duty assignments in 1966, Carl continued his service as a Commander in the United States Naval Reserve and remained in Hawaii working as a civilian for the United States Department of the Navy. In 1968, the family moved to Fairfax, Virginia, when Carl accepted a position at the Pentagon. Although no longer in the military he continued to serve the military in his civilian capacity building infrastructure and providing logistical support in the South Pacific and Southeast Asia during the Vietnam war. Once he completed his work at the Pentagon, the family moved to California in 1971, where Carl was director of the Western Division Naval Facilities Command, managing the Public Works for all Naval Facilities in the Western Hemisphere. In his “spare time” Carl finished his studies at the Stanford Graduate School of Business where he earned his MBA in 1974. Upon retiring from the Defense Department in 1987, Carl remained active as a consultant in the Defense and Public Utilities space.

Carl and Connie built a custom home in Palo Alto where they finished raising their family. All three children graduated from Gunn High School. Carl utilized his special skills in business administration and Public Works while serving on the Palo Alto City Council (1991-1999). In 2005 Carl and Connie moved into the Vi in Palo Alto, a retirement community on the Stanford campus.

Carl enjoyed studying various businesses, investing in stocks, and attending stockholder meetings all over the Silicon Valley. He knew most CEOs of the corporations in which he owned stocks on a first name basis. He enjoyed sharing his knowledge and wisdom with acquaintances, friends, and family as a financial coach on a pro bono basis.