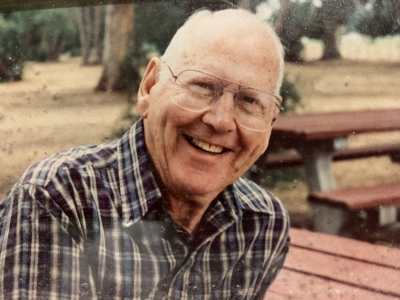 Bruce Foster Johnston, Ph.D., age 100, passed away peacefully on February 1st, 2020 in Portola Valley, California. Born in Lincoln, Nebraska on September 24, 1919. He often said that he had “lived a long life sprinkled with serendipity”. His parents, Homer and Ethel Johnston, both journalists, moved with their young sons, Bruce and his older brother Hugh, to Long Beach, California in 1922. Bruce was the quintessential beach boy who loved swimming, water polo, body surfing and was a beach lifeguard. His lifelong love of the Sierra began when he was a young boy. He attended Pomona College and graduated Phi Beta Kappa from Cornell University. At Cornell he was a member of the Telluride Association.

In 1941, he began working for the U.S. Department of Agriculture’s Surplus Marketing Administration. This was his first foray into the world of agriculture that shaped his future career. In August 1942 Bruce joined the Army. He attended OCS at Camp Davis in Wilmington, NC becoming a second lieutenant. It was during his posting at Camp Davis when he met Harriet Pollins, from Jackson, MI, on a blind date. He often said this was his greatest gift of serendipity. They were married in Wilmington, NC on March 31, 1944. Later in 1944 Bruce attended the School of Military Government in Virginia. Bruce and Harriet moved to Stanford, CA where he received civil affairs training and intensive Japanese instruction in preparation for the post WWII occupation. In October 1945 he joined General MacArthur’s staff, in Japan, where he had responsibility for price controls, rationing and distribution of food to the Japanese people following the war.

Bruce returned to Stanford University as a graduate student at the Food Research Institute in 1948. He received his M.A. and then his Ph.D. in agricultural economics in 1952. His Japanese experience fostered his lifelong career in agricultural development focusing on developing countries, especially in Asia and Africa. Beginning in 1952, he spent two and a half years as an agricultural economist with NATO. He was assigned to the Food and Agriculture Division of the Marshall Plan’s European office in Paris.

In September 1954 Bruce returned to Stanford University to join the faculty of the Food Research Institute. A consummate academic, his career spanned many decades of research and teaching in the field of agricultural development. An ardent teacher and devoted mentor, Bruce’s teaching, research, and policy analyses were distinguished by an exceptionally broad strategic perspective. Not one to be diverted by fads, he worked to clarify and communicate strategic ideas that withstood the test of time, while articulating lessons of history and debunking development myths to avert repetition of costly mistakes. He authored numerous publications and received awards for his research including a Guggenheim Fellowship and was named a Fellow of the Agricultural & Applied Economics Association. He collaborated on many research endeavors with the Food & Agriculture Organization (UN), World Bank, Agency for International Development and the Ford and Rockefeller Foundations. His career afforded him the opportunity to work in many parts of Asia, Europe and Africa and be able to live in Japan, France, Uganda, Kenya & Austria.

Bruce loved to ski, hike, play tennis, swim, travel and root for Stanford sports teams. After many happy years living on the Stanford campus, Bruce and Harriet moved to Pacific Grove, California. They thoroughly enjoyed living on the Monterey Peninsula, becoming active with the community at St. Mary’s by the Sea Episcopal church, volunteering and walking on the beach. They later moved to the Sequoias - Portola Valley retirement community closer to their former home at Stanford.

Bruce was predeceased by his wife of 67 years, Harriet, and his son, Bruce. He is survived by his daughter Patricia (Nina) Johnston of Denver, CO, his granddaughter Elizabeth J. (Quinn) Smith of Douglas, AK and his grandson, Zachary (Kaitlin) Waegell, of Watertown, MA.