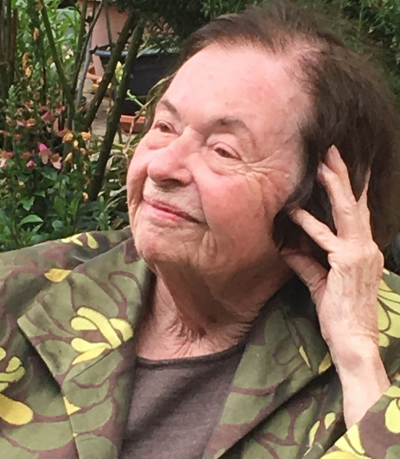 Betty Watkins Gerard died peacefully at her home of 61 years in Palo Alto, CA on November 16, 2022, at age 97. Born in Seattle, WA on February 23, 1925, she was the only child of Flora and Alva Leland (A.L.) Watkins. Both sides of her family included pioneers who’d arrived in Washington by covered wagon.

Working with words was a key part of Betty’s life. She started out writing poems and short stories, edited her eighth-grade newspaper and petitioned successfully to become the editor of the Columns humor magazine at the University of Washington. After graduating Phi Beta Kappa from UW, she earned her MBJ at Northwestern University’s Medill School of Journalism in 1948. (As one of just five women in her class, Betty was flattered when a professor praised her by saying she “wrote like a man.”) Betty’s working career included public relations/writing positions at Westinghouse, Sunset Magazine and Raychem, before spending 22 years as a writer and editor for Hewlett-Packard in Palo Alto. At HP, she managed a worldwide internal news service, producing daily “newsgrams,” and wrote for Measure magazine before retiring in 1997.

Betty applied her journalism skills to producing newsletters, press releases and ads for a number of community organizations, most recently the Palo Alto Historical Association (for which she edited several books) and World Affairs Council–Peninsula Chapter. Betty also did publicity for decades on the boards of the League of Women Voters of Palo Alto and Neighbors Abroad, emailing out press releases well into her 90s. Her witty, topical Christmas letters were enjoyed by many friends.

Her interests included international travel (one highlight: being in Berlin when the Wall came down) and photography. She was a news junkie, reading five daily newspapers until the very end of her life, and had a longstanding involvement in politics. (Betty served as Pete McCloskey’s press secretary in his 1972 campaign and, after retirement, volunteered for nine years in the legislative office of then-Senator Joe Simitian, helping tabulate Joe’s “There Oughta Be a Law” competition.) She was a co-founder of the Committee for Green Foothills and passionate about learning her entire life: auditing Stanford classes, attending classical music concerts locally and in San Francisco, participating in investment and book clubs, and reading voraciously (almost exclusively non-fiction).

Photo Gallery
0 photos Upload a photo
Remembrances
0 entries Submit a remembrance
Memorial service
Her family is planning a Zoom celebration of Betty’s long and accomplished life on February 26, 2023 at 4:00 p.m. To register, go to: https://www.remember.lightenarrangements.com/memorial-webpage/betty-watkins-gerard or email us at [email protected] for more information
Make a donation
https://www.worldaffairs.org/donate https://www.neighborsabroad.org/donate.html http://www.pahistory.org/membership.html https://www.greenfoothills.org/tribute-gift/
About this site     Contact us