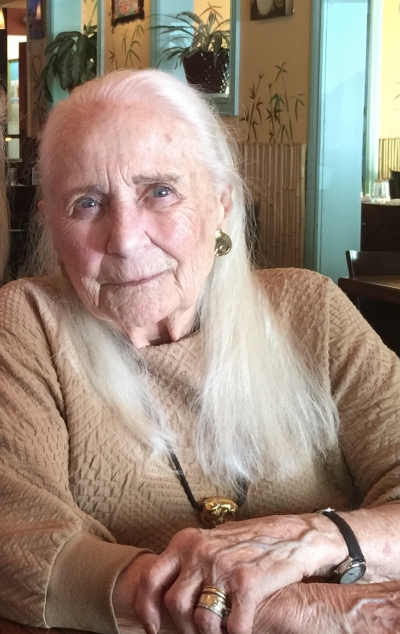 Bernetta, beloved mother, grandmother, and great grandmother, passed away surrounded and comforted by family, at the age of 95 on September 25th, 2020. Bernetta was born in Kansas City, Missouri in 1925, daughter of John and Mabel. In her early life, Bernetta enjoyed drawing, fashion and singing. She attended Central High in Kansas City and moved to La Mesa, California with her parents in 1943. There she met the love of her life, Donald F. Staehnke, the two were married on November 2nd, 1945 just after Donald returned from fighting World War II. She and Donald had one son, Richard, in 1947. Bernetta, Donald, and Richard, along with Donald’s parents Frank and Genevreau moved to the Bay Area in 1954 after their family home was taken out by the building of a new section of highway. Bernetta and Don settled in Palo Alto. There they helped grow an already established bakery distributorship until 1959, when the family decided to take on a new business called The Village Cheese House. The gourmet food store became famous throughout the area for having the largest collection of gourmet and international food products in the western United States. Bernetta often woke early before sun rise and would be in the store by 5:30am to begin prepping for the day, ensuring deliveries and products were in order. The family store became further recognized for their delicious sandwiches like the Saturday Special, the Old-Fashioned, and their Spread. Bernetta was most known and recognized as the fiery little lady behind the counter that you dare not ask for sprouts or lettuce on your old-fashioned sandwich or you’d hear at the least, a scoff. Donald passed in 1989, proceeded by Genevreau that same year, and Frank some years before. Bernetta, alongside her son, daughter in law, and grandkids continued ownership and operation of the family business with the help of so many helpful employees, family and friends, until deciding to sell the business in 2007. Bernetta rarely missed a day of work in all those 48 years. She dedicated her life to the business and was pivotal in The Village Cheese House’s success. Bernetta never remarried after Donald passed. She continued her retirement years independently enjoying her cat Puki, spending time with her family, basking poolside, watching Golden Girls and TV Land Game Shows. She greatly enjoyed her son’s gourmet cooking and shopping with her daughter in law. One of Bernetta’s greatest memories outside of her family and business life included spending time in Hawaii where she and her Donald once had property and the intention of building a home prior to his passing, and where she once caught a 185 lb. Marlin that she proudly hung in her backyard. Bernetta’s passion for Hawaii, fishing, food, fashion, cats and family was evident in her style and in her home. Bernetta’s wishes are to be cremated and her ashes to spread off the Kona coast of Hawaii. There are no planned services or memorials. Bernetta is proceeded by her beloved husband Donald, kin prior and grandson Andrew. She is survived by her son Richard, daughter in law Claudine, grandchildren Anne, Jeff (granddaughter in law Irma) and Cynthia (granddaughter in law Lacy), and greatgrandchildren Kristina, Jake and Erick.

Photo Gallery
0 photos Upload a photo
Remembrances
0 entries Submit a remembrance
Make a donation
Bernetta regularly donated to animal and pet non-profit organizations, the family asks that in her memory, support your local animal or pet organization
About this site     Contact us