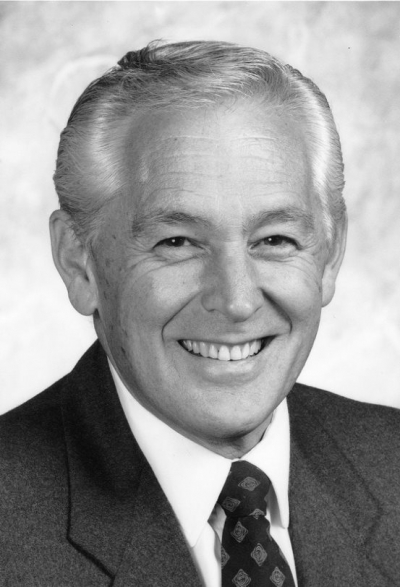 Arthur Albert Dugoni, a retired orthodontist and dental educator, passed away on Sept. 23, 2020 at his home in Palo Alto, CA. He was 95.

Art was born in San Francisco, CA, on June 29, 1925, the oldest child of Italian immigrant parents, Arturo B. Dugoni and Orsolina (Bianco) Dugoni.

Art was valedictorian at St. James High School where he also excelled in track and basketball. In 1943, while finishing his senior year of high school, Art was accepted into the Navy V-12 College Training Program at the University of San Francisco. After one year, he was transferred to Gonzaga University in Spokane, WA, where he met the love of his life, Katherine (“Kaye”) Groo.

Art began his dental education at UMKC before earning his DDS degree in 1948 from the College of Physicians & Surgeons in San Francisco (the school that would later bear his name). As part of his commitment to the Navy, Art spent time at Naval hospitals in Bethesda, MD and Oakland, CA before completing his service as a Marine Corps officer at Camp Pendleton.

In 1949, Art and Kaye were married in St. Aloysius Church at Gonzaga. The couple and their growing family lived in San Mateo, CA, while Art worked as a dentist in South San Francisco. In 1963, Art completed an Orthodontics degree at the University of Washington in Seattle.

The couple eventually settled in Atherton, CA, with their five sons and two daughters. Art enjoyed hosting summer vacations at Lake Almanor and Tahoe Donner and, in later years, on several family cruises.

Art was an avid sports fan and loved to play golf. He was a longtime member of the Olympic Club and Peninsula Golf & Country Club.

In 1978, Art was named dean of the University of the Pacific School of Dentistry after teaching there for two decades. He maintained a private orthodontic practice in South City with his oldest son, Steven, until 1987. During his silver anniversary as dean, the UOP dental school was renamed in Art’s honor in 2004. He retired as dean in 2006 at the age of 80, but continued to work for the school as Senior Executive for Development until his passing.

Art was a past president of the CDA, ADA, American Dental Education Association, and American Board of Orthodontics. Among his many honors, Art was elected to the FDI World Dental Federation’s distinguished List of Honour in 1998, which is limited to 30 living members. In 2008, Art was proud to receive the prestigious Ellis Island Medal of Honor.

Art was preceded in death by his parents, Arturo and Lina; his wife of 66 years, Kaye; and his brother, William. He leaves behind his companion of recent years, Cathie Perga of Palo Alto; his sister, Evelyn Fiorina of Denver; and seven children: Steven (Lisa) of Hillsborough; Michael (Marianne) of Fremont; Russell (Maureen) of Fairfield; Mary Rouleau (Bertrand) of Los Altos; Diane Harris (Robert) of Foster City; Arthur (Kristin) of Sacramento; and James (Lisa) of Stockton. He is also survived by fifteen grandchildren, nine great grandchildren and numerous nieces, nephews and many other extended family members.

Photo Gallery
0 photos Upload a photo
Remembrances
0 entries Submit a remembrance
Make a donation
Memorial gifts to The Art Dugoni Scholar Fund may be made online at www.dentalgifts.org to support the annual tuition of a dental student at the Arthur A. Dugoni School of Dentistry.
About this site     Contact us