Palo Alto Tailoring closed three years ago. Customers want their clothes back.
Customers of a Palo Alto tailoring business say they have been trying to get their clothing back for nearly three years,... Last comment on Feb 23, 2020 at 10:20 am | 23 comments

Editorial: Brownrigg for state Senate
In the impressive group of candidates for California's 13th Senate district, we give the nod to Michael Brownrigg, who has... Last comment 2 hours ago | 31 comments

Toddling Through the Silicon Valley
by Cheryl Bac
You are doing great
Feb 24, 2020 | 0 comments

A New Shade of Green
by Sherry Listgarten
Flying: How to lower your impact
Feb 23, 2020 | 10 comments 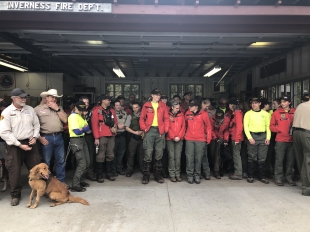 Two volunteers, one dog and a Palo Alto couple's unlikely rescue
On the eighth day of Palo Alto residents Carol Kiparsky and Ian Irwin's disappearance, Rich Cassens and his search dog came to the town of Inverness near Point Reyes Station with a very specific task: find human remains. Tuesday, 9:39 AM | 6 comments

Police chief says use of force is 'very rare.' Critics are not convinced.

Drug dealer sentenced to 6 years for fatal fentanyl overdose
A man who sold the powerful narcotic fentanyl to a woman who later died was sentenced to six years and eight months of jail time and court supervision on Monday. Tuesday, 3:10 PM

FabMo, a nonprofit that rescues discarded designer showroom samples and offers them to the public, has announced it will be moving from Mountain View to Sunnyvale after getting a significant rent increase. Tuesday, 4:10 PM

The Ravenswood City School District will pay just over $24,000 for financial errors uncovered in an annual audit in part due to double-counting students for a federal meal program. Monday, 1:48 PM | 3 comments

Three years after its colorful owner passed away, Antonio's Nut House is still open, but its new owners worry their landlord might have other plans for the California Avenue property. Saturday, 8:55 AM | 36 comments

With only 12 days until California's March 3 primary, candidates for District 13 in the state Senate are ramping up their campaign fundraising and spending efforts to convince voters to select them. Friday, 9:30 AM | 1 comments

Customers of a Palo Alto tailoring business say they have been trying to get their clothing back for nearly three years, but the doors of Palo Alto Tailoring remain tightly shut, leaving them staring longingly through the glass doors. Friday, 7:41 AM | 23 comments

VIDEO: Exploring the art of trees

Meet the 7 candidates who want to represent you in Sacramento

Flying: How to lower your impact
By Sherry Listgarten | 10 comments | 2,242 views