Message from our publisher: An appeal for your support of good journalism
Just three weeks ago, it was hard to imagine the imminent human and economic impacts of the COVID-19 crisis. Yet here we... Last comment on May 26, 2020 at 10:58 pm | 40 comments

Peninsula Foodist
by Elena Kadvany
'All of us can do something.' Local black restaurant owners react to George Floyd protests
Jun 2, 2020 | 6 comments

Toddling Through the Silicon Valley
by Cheryl Bac
Ready for Nothing
May 31, 2020 | 0 comments

A New Shade of Green
by Sherry Listgarten
Power Lines, Pipelines, and the Limits of Eminent Domain
May 31, 2020 | 19 comments 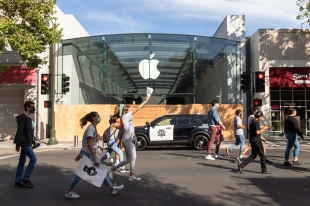 Hundreds of protesters marched through Menlo Park, Palo Alto and East Palo Alto on Monday to protest police brutality in the wake of the death of George Floyd, who was killed while in Minneapolis police custody last week. Tuesday, 12:38 PM | 78 comments

Hours after staged local protests on Monday over the killing of George Floyd while in Minneapolis police custody, city leaders expressed support for those fighting for racial equality. Tuesday, 12:15 AM | 16 comments

A regional effort to replace and expand the narrow Newell Road Bridge between Palo Alto and East Palo Alto reached a crucial milestone on Monday night, when the City Council gave the project its final clearance. Tuesday, 9:48 AM | 17 comments

George Floyd and 'the moral arc of the universe': insight from MLK's official historian

Stanford historian Clayborne Carson offers some much-needed clarity and historical perspective surrounding recent protests throughout the U.S. over the killing of George Floyd. Tuesday, 9:04 AM | 2 comments

While graduating high school seniors can't walk across the stage to receive their diplomas surrounded by friends and family this year, they will be able to celebrate via a car parade this Wednesday. Friday, 8:19 PM | 20 comments

Coronavirus central: Cases in people ages 50 and younger rise by the dozens over past week

Curbside pickup — a step forward, but far from a lifeline for businesses

Workspace changes won't look too radical, but they may feel invasive.

Premarital and Couples: Are you Kinder to Strangers than to Your Partner?
By Chandrama Anderson | 0 comments | 2,014 views