Facility now up and running after a year of delays 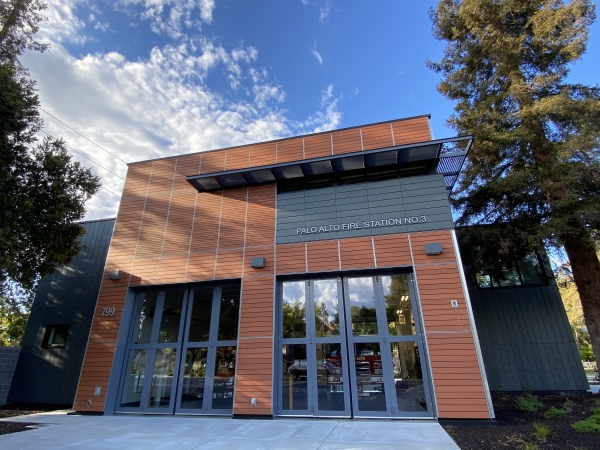 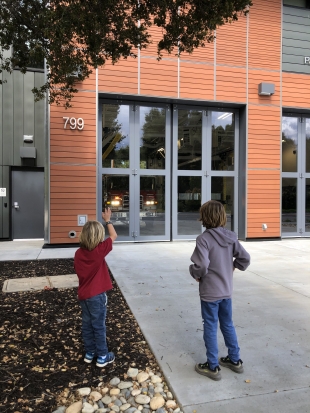 There were snipped ribbons, no congratulatory speeches and no rounds of applause at Rinconada Park on Tuesday, when Palo Alto's new fire station unlocked its doors, marking what is surely the softest opening of a public facility in the city's history.

The completed station at Embarcadero and Newell roads was highlighted in a statement sent by email Wednesday from City Hall, a marked departure for a city that likes to celebrate and commemorate. Three fire department personnel are currently working there, according to the announcement, and are "practicing social distancing as much as conceivably possible during the coronavirus health crisis."

"The fire crews at this and every Palo Alto fire station are cleaning and disinfecting their work stations, apparatus and common areas, every morning and throughout the day," the statement read.

The city had initially scheduled a public ceremony for the new building for March 21 but had canceled the event, as well as all other public gatherings, to comply with guidance from public health officials relating to the coronavirus pandemic.

The opening of the station occurred about a year later than the city had expected when construction launched in early 2018. Since then, the project has seen numerous superintendents and subcontractors come and go, with the contractor responsible for the station's heating, ventilation and air conditioning system abruptly departing last year.

The station, which cost about $10.1 million to complete, replaces the 1948 station that previously occupied the site. The new station includes separate dormitories for men and women, an exhaust-capture system and bays that allow fire trucks to go through, obviating the need for fire trucks to make three-point turns to back up into the station. The building also has a bike-repair station and a water bottle filling station.

Earlier this month, Fire Chief Geoffrey Blackshire highlighted numerous features that he said will shave off response time, including doors that can be opened quickly, a pole that drops firefighters next to their vehicles and a digital voice system that notifies responders about the calls they’re responding to.

"The way it was designed will impact our ability to provide a better service to our community," Blackshire said during a March 2 meeting of the City Council.

The Rinconada station is the first project in the council's 2014 infrastructure plan to cross the finish line, and one of several slated for completion this year. Even though many city activities have been suspended because of Santa Clara County order banning all but "essential" activities, public works projects are an exception. As such, work is still progressing on the city's parking garage near California Avenue, a project that is expected to be completed this summer.

According to the city spokeswoman Meghan Horrigan-Taylor, current activities on the garage include rebar and conduit work. A concrete pour is scheduled for this Friday, she said in an announcement Wednesday.

The new fire station at Rinconada is one of two that is up for replacement as part of the council's 2014 infrastructure plan. The current schedule, which may be subject to change given the public health emergency, calls for breaking ground on a new fire station at Mitchell Park this fall.

2 people like this
Posted by Resident
a resident of Another Palo Alto neighborhood
on Mar 26, 2020 at 6:53 pm

I suppose we should be pleased about this, but forgive me if I don't join in the jubilation.

>> There were snipped ribbons, no congratulatory speeches and no rounds of applause at Rinconada Park on Tuesday

Every cloud has its silver lining I guess, no matter how small. How about we make it a "tradition" that any project that is late, over-budget, and is essentially a required infrastructure enhancement (earthquake safety) NOT get speeches and etc. It is firestation. It replaced a firestation that wasn't earthquake safe. Let's move on, and figure out how to get all projects like this done on-time, under-budget, and high-quality. The way some people talk, you would think this little project was a $6.4B signature bridge.

This is good news in a time when our emergency service providers are needed more than ever.
The delays and cost over runs were due to the booming regional office construction market which has resulted in the pirating of subcontractors and limited numbers of trades people while jacking up their costs. That market is probably in the midst of now crashing for an unknown period. When that happens, public works, and perhaps housing projects, will be the beneficiaries.

Report Objectionable Content
Email Town Square Moderator
4 people like this
Posted by Nick
a resident of Monroe Park
on Mar 29, 2020 at 1:20 pm

Report Objectionable Content
Email Town Square Moderator
1 person likes this
Posted by efs
a resident of Crescent Park
on Mar 30, 2020 at 11:41 am

I choose to be thankful for an up-to-date fire station and people to staff it.

Report Objectionable Content
Email Town Square Moderator
5 people like this
Posted by ukelele
a resident of Old Palo Alto
on Mar 30, 2020 at 11:55 am

After reading these replies...I can't get over how many crab apples we have in Palo Alto!

@ukelele Amen! Any article whatsoever concerning anything at all will result in sour comments.

I'm very happy to have them back! It was actually nice to hear the sirens the other day. Nice about the bike repair station too.

Posted by Novelera, a resident of Midtown
>> @ukelele Amen! Any article whatsoever concerning anything at all will result in sour comments.

Posted by TorreyaMan, a resident of Palo Verde
>> Gosh, Palo Alto so full of negativity.

I'm *positive* that I don't like politician's speeches at empty ceremonies, and, I'm *happy* that we have a new firestation that is earthquake resistant.

Report Objectionable Content
Email Town Square Moderator
4 people like this
Posted by Congrats!
a resident of Duveneck/St. Francis
on Mar 30, 2020 at 3:37 pm

Great news! This was a critical piece of infrastructure we need not only for day to day operations but also to work fully after a major earthquake when fires and EMT calls will be critical. Good job to public works on getting this project finished despite an incredibly hot construction market and difficulties with sub contractors. Also the "over-budget" comments aren't quite true since there were penalties with late delivery.

A Pragmatic Approach to A Trillion Trees
By Sherry Listgarten | 1 comment | 3,282 views

Repairing a Disagreement with your Beloved & “Physical” vs. “Social” Distancing
By Chandrama Anderson | 1 comment | 2,080 views