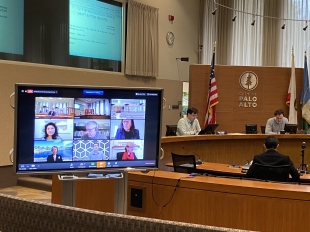 At its March 23 meeting, with five of the City Council's seven members participating remotely via Zoom, the council voted to abandon a planned business tax. Photo by Gennady Sheyner.

It took years for Palo Alto to prepare a business tax that city leaders were planning to place on the November ballot. And just one surreal week to shut the effort down.

The City Council on Monday officially abandoned the proposed business tax, which officials were hoping to pay for various transportation improvements, including the city's ambitious effort to redesign its rail crossings. But with the coronavirus pandemic leveling the local economy and sending the business community into a tailspin, council members recognized that the proposal is no longer tenable.

The council unanimously agreed that rather than pursuing the tax, staff should move ahead with strengthening the city's famously error-filled business registry. Council members also left open the possibility of revisiting the business tax in 2022.

The council's vote followed a recommendation from City Manager Ed Shikada, who argued in a report last week that the effort should be suspended given the economic turmoil caused by the coronavirus pandemic and the shelter-in-place order that public health officials have implemented to slow down the spread of the virus.

The report from Shikada and Chief Financial Officer Kiely Nose point to the shifting economic landscape, as well as the difficulty of providing outreach, engagement and education relating to the tax during the shelter-at-home order.

"Small businesses such as restaurants and cafes have closed or are seeing precipitous declines in patronage while large companies face heightened uncertainty," the report states. "In addition, Santa Clara County's Shelter in Place Public Health Order makes it more difficult to solicit meaningful engagement and feedback with stakeholders, including both residents and businesses."

While the business tax has spurred extensive council debate in the past, the council reached a swift consensus on Monday: now is not the time. Councilwoman Liz Kniss pointed to the dramatic shift in the local business scene. While the drop in economic activity is most visible in commercial areas such as downtown and the California Avenue business district, companies in Stanford Research Park are also struggling, and have been for a while, she said.

"What this does is — it's that nail that's going to, I think, make it very difficult for the businesses there to continue, especially with our shelter-in-place rule," Kniss said.

Vice Mayor Tom DuBois, a staunch supporter of the business tax, also concurred Monday that now is not the time.

"Every year we've brought it up, we've heard a lot of arguments opposing the tax. A lot of them were short-sighted (and) red herrings. But the reason today was valid," DuBois said.

Councilwoman Alison Cormack also noted that the main reasons for the tax – curbing traffic congestion and preparing for an increase in Caltrain service – are no longer as pressing as they were just weeks ago, with train ridership plummeting and most employees working remotely.

"I don't know how great the need will be in the medium-term," Cormack said.

The council also agreed that the city's decision on grade separation will have to be postponed, given the city's shifting priorities and the recent cancellation of meetings by the Expanded Community Advisory Panel, a citizen group that is helping the city reach a decision. Shikada is set to return in the coming weeks with an updated timeline for picking a preferred alternative for rail crossings, a decision that the council was hoping to reach in May.

Find comprehensive coverage on the Midpeninsula's response to the new coronavirus by Palo Alto Online, the Mountain View Voice and the Almanac here.

No new taxes that roll on down to residents and consumers.

And no to closing Churchill Avenue and sending 7000 more cars onto Embarcadero Avenue!

Posted by Independent, a resident of Esther Clark Park

>> No new taxes that roll on down to residents and consumers.


Report Objectionable Content
Email Town Square Moderator
6 people like this
Posted by Novelera
a resident of Midtown
on Mar 25, 2020 at 2:21 pm

City Council was holding their noses about the business tax even when they finally decided to put it on the ballot. And now they have the perfect excuse to keep letting businesses in Palo Alto off the hook for another TWO years. And this is considering that every municipality on the Peninsula has a business tax, except Palo Alto.

Report Objectionable Content
Email Town Square Moderator
3 people like this
Posted by DTNResident
a resident of Downtown North
on Mar 25, 2020 at 4:42 pm

We're closing our downtown Palo Alto facility and moving to a lower tax state at the end of the year when our lease is up. The business tax was the last straw and the decision has already been made. The lower tax states seem to be running just fine without demanding more and more from the business owners.

"Improving" a business registry that no one uses or has any need for makes about as much sense as trying to devote people to "improve" 56K baud modems. I can only imagine what the "improvements" are going to cost me when the whole thing should be shut down and the money refunded. But nope, you're going to "improve" it. That tells me where your head is and that my decision to vacate is the right one.

The tenants pay the property taxes, not the owners of the buildings. I pay $40,000 per year plus $800 per employee to park on the street. Apparently that wasn't enough, so soon I'll be paying $0 and you can try to squeeze someone else for more in two years. You can walk down University Ave. and see all of the closed businesses before this virus hit. It's about to get 10x worse. Adios and good luck.

Report Objectionable Content
Email Town Square Moderator
4 people like this
Posted by Anon
a resident of Another Palo Alto neighborhood
on Mar 26, 2020 at 10:57 am

Posted by DTNResident, a resident of Downtown North

>> We're closing our downtown Palo Alto facility and moving to a lower tax state at the end of the year when our lease is up. The business tax was the last straw and the decision has already been made. The lower tax states seem to be running just fine without demanding more and more from the business owners.

Without seeing your tax returns, we have no way of knowing why or how a proposed business tax pushed you out of the state. IOW, your statement is impossible to either verify, or, understand even if true.

How about you post some actual numbers, and, specifics about how your costs break down.

The high cost of small-office-space rentals is much more of a problem for most small service providers than City of Palo Alto taxes. Why are some huge employers staying here when they could move some or most of their operations elsewhere to a lower rent -- business AND residential -- area. e.g. Tracy.

A Pragmatic Approach to A Trillion Trees
By Sherry Listgarten | 1 comment | 3,284 views

Repairing a Disagreement with your Beloved & “Physical” vs. “Social” Distancing
By Chandrama Anderson | 1 comment | 2,081 views